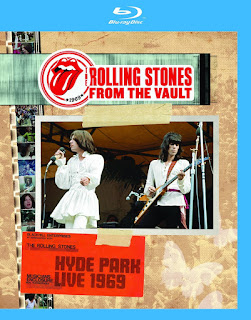 Another one from the ongoing Stones From The Vault series, which is an absolute joy. All these live shows from back in the day are just what long-time fans want, and they go a long way to explaining to youngsters what the hubbub was about in the first place.


This one is well-known, and has been sampled in many documentaries before, I'm actually surprised it hasn't been fully released until now. Back in 1969, free shows and festivals were all the rage, and the Stones had great luck with this one in their home town. Not so much the other one they tried that year, over at Altamont in California, but that's another story. This was planned as a peace and love vibe, a welcome to the group's new guitar player Mick Taylor, his first-ever show, all for free at London's Hyde Park.


The vibe did change dramatically as their recently-removed guitar player and former leader Brian Jones was found drowned in his pool two days before. The band had tired of Brian's issues and were no longer friends, but Jagger managed to muster enough emotion to plan a bit of a tribute to him at the start of the show, a reading of some Shelley poetry and the release of a bunch of butterflies. The crowd, somewhere between a quarter and a half a million, didn't really have a clue what was going on with the poem, and the butterflies were cold and sleepy, and many were crushed to death instead of flying to the heavens to meet Brian.


That, and Jagger's ridiculous man-dress are what most people think about that day, and really, the music was secondary to the happening. It's hard to judge how the Stones played that day, as what we have left is this documentary done by Granada TV way back in the day. It features lots of interesting footage, including interview bits with Jagger, as we see him home before the show, in the limo to the event with partner Marianne Faithful and her son, and learn that he's actually nervous about the day. There's good footage of the crowd, and the Hell's Angels acting as security. The British batch were much more in control than their American counterparts at Altamont, again another story.


But the problem with the documentary style is that the songs are not complete, the chronology is all over the place, and several numbers from the set list are not included. It seems the unedited footage has not survived, which is not a surprise, TV stations often didn't keep the raw footage in those days, or it gets misplaced in the years after. If it is out there, I'd like to see the true full performances, at least for history's sake. But as a fan, I'm thrilled to pick up this version of the day, spruced up for Blu-ray,
Posted by Bob Mersereau at 10:44 PM