MUSIC REVIEW OF THE DAY: PETE TOWNSHEND - TRUANCY: THE VERY BEST OF 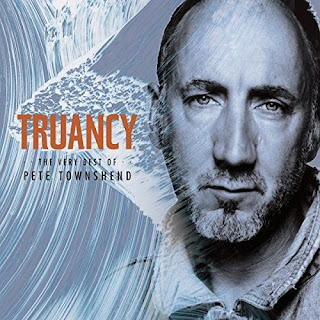 Since the early 1970's, Townshend has run a parallel solo career to his efforts with The Who, which sometimes have overshadowed the primary band's work. He seems to have even hoped to free himself of the band, especially after the death of Keith Moon. But his songwriting slipped by the '80's, and like The Who, all the best stuff happens before then for his solo work too.


There are several Townshend best-of's out there, including a couple of two-CD versions. I'm guessing new-to-Pete buyers will do fine with just this single-disc, 17-track set. It's basically a primer for a new generation of fans, so in typical fashion it includes a cut from most of his albums, whether they deserve it or not.


There is recognition of the best two Townshend albums. His first solo from 1972, Who Came First, was not a standard release, but rather a collection of demos, and songs done up for Meher Baba charity albums. One of the great home recorders of all time, here we get versions of Let's See Action and the key Lifehouse song Pure And Easy that could have been placed on any Who album as is. Next up came an album done to help his friend Ronnie Lane, Rough Mix, which turned from a production job to a co-starring role. This is the gem of the catalogue, with Townshend contributing some of this best compositions of the time, and quite different from his usual writing.


The rest of the disc shows the falling-off, despite great effort. His only solo hit, Let My Love Open The Door is catchy but slight. Grand projects White City and Psychoderelict were attempts at new rock operas, and sadly, convoluted and just not entertaining. There are other really good albums that were barely touched. I've always found the Scoop series of discs fascinating, three double albums full of home demos, but only a single track is included.


As usual, in an effort to attract buyers from the huge fan base and collector community, new tracks have been added. The two songs are recent, and sadly, uninteresting. Guantanamo is an attempt at righteous rage, but all Townshend seems to know about Cuba is that cigars are made there. Here's my advice to prospective Townshend buyers: Get Who Came First, Rough Mix, any or all of the Scoop ones, and buyer beware after that.
Posted by Bob Mersereau at 9:56 PM