MUSIC REVIEW OF THE DAY: ROLLING STONES - THE MARQUEE CLUB LIVE IN 1971 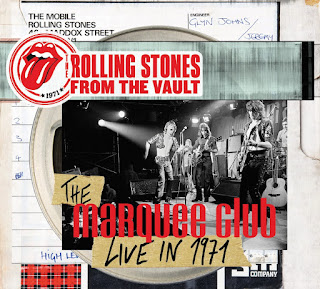 Such was the confusion and seat-of-pants decision-making in the Stones camp in 1971, the group actually did their tour for the Sticky Fingers album before it came out.  Zipping around the U.K. for a few shows in March of that year, the group had to get out of the country by April 1, in the famous move to France as tax exiles.  Exile On Main Street was awaiting, but this meant no tour was forthcoming for the U.S. to support Sticky Fingers.

It was decided to offer up some film for promo purposes, so at the end of the U.K. run of shows, the well-oiled group set up in the Marquee Club, their old haunt, for an invited audience of 150 or so friends and fans.  Sounds perfect.  Guess what?  It was!  Even better, the film has finally surfaced again, and been restored into this super package.  There's a DVD of the 40-minute set, plus a CD version, some different takes of a couple of the songs, and a BBC Top of the Pops appearance for Brown Sugar to top up the running time.

The footage is up-close and often stunning, a great front row view, especially of Jagger.  The camera work is first rate, and the audio sparkles.  You can't ask for better video from this time period.  As for the set list, it's just eight songs, but packs a wallop, with four from Sticky Fingers, some Stones classics and a Chuck Berry cover (Let It Rock).  These are gods of rock in their prime, offering up songs obviously destined to become classic:  Brown Sugar, in all its shaky glory, Dead Flowers with its country-shock, Bitch with its killer opening.  Midnight Rambler was already a favourite from Let It Bleed, but here takes on an epic length and intensity.  It's a blues, the whole set is pretty much a blues one, and everyone contributes peak performances, from the guitar combo of Richards and Taylor to the engine of Wyman and Watts.  With Jagger up front being a lead singer and band member instead of a stadium-filling cheerleader, this disc must be seriously considered for the Best Stones DVD ever.
Posted by Bob Mersereau at 2:31 PM