MUSIC REVIEW OF THE DAY: THE SLOCAN RAMBLERS - COFFEE CREEK 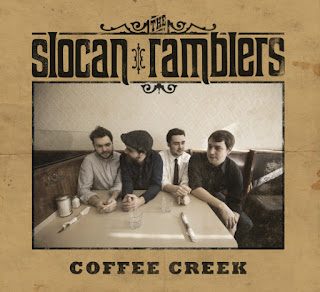 The Slocan Ramblers have the great, old sound of original bluegrass.  They sound like they could be straight out of the '40's.  Except, if they had been around in the '40's, these boys play so fast folks would have thought their talent came from the devil.  Heck, I'm starting to think that why myself, there's some nimble fingers flying in impossible ways here.

The Ramblers have two styles: old, and not-so-old.  But even the modern touches they add, mostly less-common chords and more current techniques, retain the antique feel.  Recorded with the players live in the studio, standing around the microphones, it's not far from the techniques available 60 years back.  Anybody attempting Woody Guthrie's Pastures of Plenty back then wouldn't have used the circular pattern mandolin player Adrian Gross picks, but singer and banjo player Frank Evans sure sounds like one of Woody's traveling companions.  When they move into a medley of Evans' tune Honey Babe halfway through, it's not just seamless, it could have been part of the original.

Toronto may not seem the most likely place to harbor such talented bluegrass players, but that's the reality.  The interplay between guitar (Darryl Poulsen), mandolin and banjo is not only packed with show-off moments, it's made up of sophisticated arrangements.  Along with bass player Alastair Whitehead, the quartet keeps the songs changing constantly, always coming up with a new break, start or ending.  About half the tracks are instrumental, all the better to hear those great moments.  This is as grand a bluegrass album as you'll hear anywhere.
Posted by Bob Mersereau at 11:35 AM