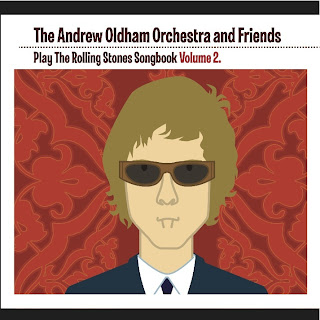 Well this is fun!  The ever-entertaining, one-time manager and producer of the early Rolling Stones comes out with a sequel to his 1966 instrumental album.  The guy's a card, but a loveable one, and as his satellite radio show, and series of three music biz books show, has some great insights.  But, covering the Stones for an album? What's the point?

Well, first off, this isn't some instrumental, elevator album.  There are several vocal tracks, and it's really a compilation of interesting artists that Oldham has found or drafted, doing unique interpretations.  And what a pleasure it is.  These are far from straight readings, and offer up some cool folks who take care to both pay homage, and to advance the well-known songs into new territory.

You'll know some of them, such as Elliot Easton who was once in The Cars, or Gary Lucas, considered one of the fines guitar guys, credits including Capt. Beefheart and Jeff Buckley.  Vashti Bunyan is a revered English folk singer, and The High Dials are Montreal indie-pop favourites.  Gruff Rhys of Super Furry Animals takes a track, and good old Al Kooper (he produced Freebird, doncha know) adds french horn.  Oh, and Johnny Marr drops by to add some guitar to As Tears Go By.  But this is far from an all-star tribute disc, as a variety of lesser-knowns handle many of the tracks, performing and co-producing with Oldham.


So, you get hits such as Paint It, Black and Under My Thumb (twice, completely different, one an instrumental) and more obscure, She Smiled Sweetly and Children Of The Moon.  Cheekily, he also includes Bitter Sweet Symphony, another poke at the poor Verve, who sampled a cut off his first volume of Stones Songbook for that hit, got caught, and had to give up the rights to their biggest hit now credited to Jagger/Richards/Ashcroft.  Oldham's still stirring the pot, adding to controversy just like he did for the Stones back in the riot days.


In case you're regarding this as a cynical grab by an old player, still latching on to 40-year old fame, consider this:  Oldham says he's done it because the music of the Stones didn't get covered as standards by jazz groups and orchestras like The Beatles' songs did, mostly due to the nasty image of the group.  He says he remains proud of the band and especially the great songs, and they deserve to be recognized as standards.  As usual, he has a good point.  And a good album.
Posted by Bob Mersereau at 10:08 PM