MUSIC REVIEW OF THE DAY: CHRIS ANTONIK - BETTER FOR YOU 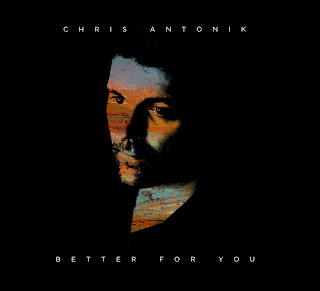 Ontario blues man Antonik returns with his second release, following the success of his 2010 self-titled debut.  While that one put his name out there, this time Antonik's taking an interesting, somewhat humble approach.  The whole theme of the album, lyrically and musically, is putting others first.  The lyrics reflect it, and it extends to the music as well, as he drafts in several well-known pals to handle everything from solos to lead vocals.


Cruising through a variety of styles, from soulful, smooth and catchy to jam band funk to straight electric blues, Antonik drafts a cast of characters to fit the parts.   Josh Williams of the Fat Cats takes the lead vocal and keyboards on the horn-driven Turn To Shine.  Mike Mattison, the singer with both The Derek Trucks Band and Tedeschi-Trucks brings his whiskey soul sound to the Southern-styled Broken Man.  The great Shakura S'Aida handles the mic for Come From A Good Place, while Suzie Vinnick chimes in with harmonies.  This one's a peach, with the smooth vocals offset by some nasty electric leads from Antonik.  Other guest include MonkeyJunk's Steve Marriner on harmonica, Richard Underhill arranging the horns, and Julian Fauth on keys.

When he does sing, on six of the eleven cuts, Antonik shows he has no problems in the vocal department.  Despite letting so many folks take star turns on the tracks, he really proves himself in all the important ways.  The songs are all originals, and all over the blues map, a lively and confident set.  And his guitar shines throughout, again with a variety of sounds and styles, dirty and loud to aching and subtle.  Antonik's not just getting by with a little help from his friends, he's using their talents to make a good thing even better.
Posted by Bob Mersereau at 9:18 PM