MUSIC REVIEW OF THE DAY: WILLIE NELSON AND FAMILY - LET'S FACE THE MUSIC AND DANCE 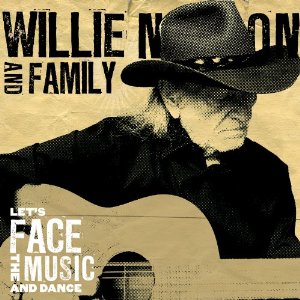 Oh, people go on and on about Leonard Cohen out there doing it on stage at 78, and Dylan still on the Never-Ending Tour, but heck, Willie's turning 80 on April 30th, and he looks better than either of them.  He probably is roughing it a bit more than the others too, out there on that bus much of the year.  Plus, he makes an album a year, something he's done since 1965!

You never know that you'll get from a new Nelson recording, but this one has the feel of something a little more special, 80th birthday and everything.  He's in his mellow mood here, a little Spanish guitar, lots of covers of old popular songs from the jazz era to the 50's, and a relaxed, jovial vibe.  The mood of celebration continues through the recording, as it was made with his long-serving band, Willie Nelson and Family, the same crew that takes it on the road month after month.  There's a nice moment when he calls for "little sister" to take a solo, the beloved Bobbie Nelson on piano.  The easy vibe they give these numbers could only come from a group absolutely comfortable with each other.

Willie's comfortable with the material, too.  This is the stuff he grew up with.  The 40's standard You'll Never Know lets him croon a sad one, while Walking My Baby Back Home gets into a nice swing.  The Irving Berlin title track gets a little bluesy, and Carl Perkins' Matchbox is about as rockin' and modern as it gets.  All the while, Nelson punctuates the tunes with his signature solos, Mickey Raphael adds his tasteful harp, and Bobbie shows what a true team player she is.  Ya, Willie has gone this route before, several times, but it's not Stardust this time, not orchestrated.  This is the band alone, have a grand birthday party, and nothing feels old about the music or the man.
Posted by Bob Mersereau at 6:53 PM