MUSIC REVIEW OF THE DAY: THE MUSIC IS YOU - A TRIBUTE TO JOHN DENVER 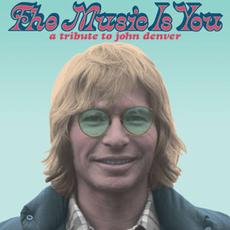 Somehow, John Denver got hip again the last couple of years.  Now, this is largely due to younger people finding his music in their parents' collections.  For some of us who lived through it, it's a bit hard to stomach this.  While he wasn't Barry Manilow, he hardly rocked, and there was a hint of show biz in his aww-shucks appeal.


Yet taken on their own, many of Denver's songs do stand up, when played now as folk, roots and country numbers.  Here, an eclectic group bring out the best of them.  And it's no surprise that Denver's biggest crossover hit, and most cheesy one, found no takers.  There's really no redemption for Thank God I'm A Country Boy.  Other songs with a more serious take on that love of rural America make for better choices.

His first solo hit, and one of his best, Take Me Home, Country Roads, pretty much set the theme for these tunes, the desire to get out of the city and back to the land, back to family and goodness.  It's interesting that it wasn't the hippie version of the day, the commune people.  In Denver's songs, Ma and Pa are still working the farm, and he's reconnecting with that warmth.  Still, they resonate today, there's no denying it.  Brandi Carlisle, with Emmylou Harris on harmonies, does a strong version, centered around the great singing on this memorable lyric, giving it more of a jug band flavour.

What Denver did for West Virginia with that song, he did twenty times over for Colorado.  In fact, he took his stage name from the state capitol, and following the success of his signature hit Rocky Mountain High, moved there permanently.  Those nature-and-mountain loving numbers provide some of the best covers here.  Allen Stone's version of Rocky Mountain High is delicate and passionate, and shows Denver at his best, with a pretty melody and grand descriptions:  "I've seen it raining fire from the sky."  Mary-Chapin Carpenter's take on I Guess He'd Rather Be In Colorado shows his sensitive writing could be quite earnest and touching.

It's certainly not a collection made for original Denver fans, but rather it aims at everyone from hipsters to nu-hippies.  Dave Matthews is here, and J Mascis of Dinosaur Jr.  Train get to do Sunshine On My Shoulders, and Old Crow Medicine Show do their old-time thing on the old-time honouring Back Home Again.  The biggest surprises come from My Morning Jacket, reviving Leaving On A Jet Plane, the number Denver wrote that became a huge hit for Peter, Paul and Mary, and ..shock... a strong-sounding Evan Dando, back from God knows where, and making the number Looking For Space sound like a post-grunge confessional from someone who's lived and learned.


Yes, I lived through the Denver years, a time when you had so few radio stations that you had to put up with the lighter fare to get to the other gems on the Top 40.  We'd cheer for Grand Funk Railroad, Wings and Elton, cringe when The Carpenters or Denver came on.  To this day, I've never owned one of his records.  This tribute disc may actually make me do something about that.  Or perhaps this is a better way to hear him these days.
Posted by Bob Mersereau at 11:04 PM