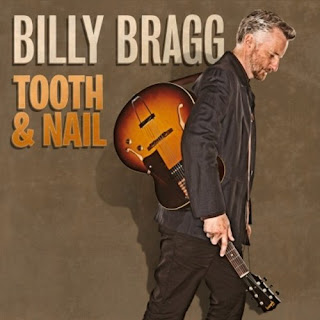 Bragg teams up with producer Joe Henry here, and his crack band of sympathetic regulars, made up of Jay Bellarose (drums), Greg Leisz (guitars, etc.), David Piltch (bass), and Patrick Warren (keys).  This is the same crew that's made discs for talents as diverse as Bonnie Raitt, Loudon Wainwright III, Solomon Burke and Bettye Lavette.  They are a stellar crew, and provide Bragg with the best backing he's ever had on disc.


Normally, that's a good thing, but in this case, it takes a bit to get used to it.  He has always been better know for strapping on an electric and spitting out a solo number, (A New England), or making a bright, poppy piece such as Sexuality or Waiting For The Great Leap Forwards.  Even his more recent work with the Blokes was more rough and ready, and collaborations with Wilco on the Woody Guthrie tracks for the Mermaid Avenue project were about feel, not precision.  And of course, Bragg's no vocal giant with his very working-class English delivery.

So it's odd to hear the mandolin-acoustic bass-piano-percussion artistry of Your Name On My Tongue, as Bragg struggles to hit the notes.  A better singer wouldn't sound so out of place.  Similarly, the acoustic strumming on Tomorrow's Going To Be A Better Day is way too precise and classy, and I'd rather hear Bragg's clunky hands knocking out the chords on a complaining electric.


At the same time, these are some of the better songs he's written since the 90's, including Swallow My Pride.  Bragg's always been at his best when deflating the male ego in relationships.  And while he's not the first person you'd expect to do some Scripture-quoting, he knows a good philosophy when he reads it, repeating the verses in Do Unto Others.  And the old wit is on display as well, with the line "If you go chasing rainbows, you're bound to end up wet."


I think it was a good idea, but just not the right match-up.  His voice just can't handle that kind of quality backing.  Plus, the playing is too restrained.  The song There Will Be A Reckoning could use some fireworks behind it, to match its words about those who spread intolerance.  I'm hoping I get more used to it as time passes, because I do believe this is his best in awhile, which makes the production even more frustrating right now.
Posted by Bob Mersereau at 9:45 PM