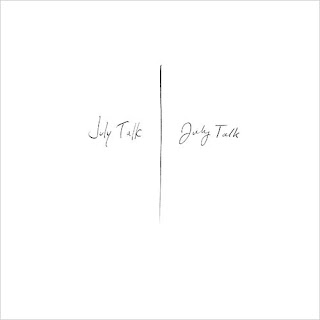 There's a ton of buzz about this Toronto band, including folks who saw them showcase at the recent Canadian Music Week.  It's a pretty interesting lineup, fronted by co-lead singers Leah Fay and Peter Dreimanis.  As opposed to most bands, they share the vocals on each song, with a raw dynamic that's more he said, she said rather than harmony duets.

Each has their own persona; Fay can sing, Dreimanis is very gruff, raspy, nasty.  Blistering, intense roots-rock is going on behind, bass-heavy and guitars loud.  The closest comparison I can muster is the early X albums, although these singers are even more distinct, polar opposites really.

The effect is cool, too.  Fay takes a line, then Dreimanis, coming together in the chorus like a twisted Sonny and Cher.  Fay can be sweet and dreamy, while he's growling so much he sounds demented.  Somehow they blend, and somehow the music does as well, dreamy parts with synth meeting dirty blues.

There's nothing like seeing a buzz band live, and July Talk are on the road right now, playing Friday in Moncton, NB.  Here are the dates: