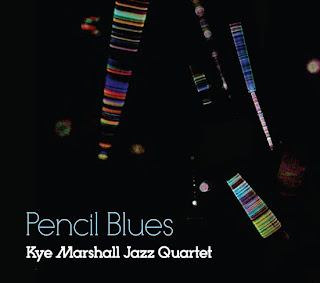 Marshall's one of a kind.  A cellist equally adept at jazz and classical, old and modern, she composes a variety of pieces that blur the genres and confound your expectations.  Here she leads her jazz quartet plus a couple of guests through a mix of instrumentals that feature anything from standards to avant-garde, and even invents a new way to play her axe.


The title cut comes from an experiment, where she took a pencil, flipped it around to the metallic end, and used it to tap her cello strings, creating a percussive, staccato sound.  For The Birds has an equally interesting sound to start the piece, mimicking avian chatter, and I don't know how she got that.  Using all her training, I Remember Johann Sebastian is a jazz/classic blend.  It opens with a piece based on a Bach cello suite, and then lets the group improvise around the standard I Remember April, the intention being to show what Bach might have been like if he'd been born these days and working in jazz.


Heady stuff, but still, a delightful and easy listen.  The solos are rich and lively, not just from Marshall, but also guitarist Andrew Scott, who contributes several smooth runs and tasteful, melodic chord sequences.  Bass player Don Thompson is equally enjoyable, with lots of ear-pleasing lines.  But in the end you'll sit back and marvel at what Marshall can do with a cello, whether it's the funky, dirty sound she gets on Summer Sizzle, or when she switches to formal classical technique, it still blends with the jazz combo.  Cello in jazz may not be new (Ray Brown had an album called Jazz Cello in 1960, and there are several examples around today), I can't imagine anyone takes it as far, and at the same time, makes it sound so effortless.
Posted by Bob Mersereau at 7:57 PM