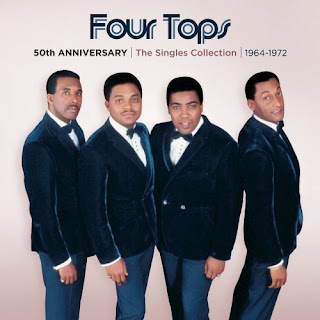 Of all the very greats at Motown, the Four Tops get the least amount of respect and chatter, probably because they were the least troubled or controversial.  The Supremes had the Berry Gordy-Diana Ross soap opera, and the poor treatment of the others.  Marvin Gaye had drugs and a violent death, and David Ruffin of The Temptations wasn't far behind.  Smokey Robinson and Stevie Wonder were unique and fascinating characters.  All the Tops had was tremendous talent.  Even if they don't get the TV movie of the week, the group's songs remain among the most beloved of the Motown classics.

The Four Tops reigned, err, supreme during the golden era of the label's hits, 1964 - 1967.  Almost everybody at Motown was scoring huge hits at the time, but the Tops had perhaps the best run of them, thanks to a convergence of several weapons.  First, the songs and productions they were being granted by Holland-Dozier-Holland were the most mature they had, certainly heavier topics than The Supremes were doing.  There was drama and tension in numbers such as Seven Rooms Of Gloom and Bernadette, and even Baby I Need Your Loving wasn't lighthearted, this was desperation on the charts.  Second, the greatest singer of them all, Levi Stubbs, was the one doing the pleading.  No softy like Smokey, no cuteness like Little Stevie, Stubbs had true muscle in his voice, power that shook the radio.  Third, the Funk Brothers really latched onto this material.  Some of their greatest moments can be heard in the Tops' hits.

Reach Out I'll Be There can be argued as the very best Motown production of them all.  A #1 hit from 1966, the intensity of the song is felt in both the incredible Stubbs vocal, and the driving track.  The special highlight here is James Jamerson's bass line, the career highlight of this genius of the instrument.  The peaks and dramatic tension of the track are overwhelming, forcing Stubbs into more and more desperate notes.  The end of the song is almost a relief, you feel so bad for the guy.  The string of singles that followed were all close to this milestone, a run of tunes that rivaled all the top groups of that or any day:  Standing In The Shadows Of Love, Bernadette, 7-Rooms Of Gloom, You Keep Running Away.  And then it all went wrong, fast.

No group was better served by Holland-Dozier-Holland, and none felt their departure from Motown harder.  When the trio fell out with Berry Gordy and quit the label, there was no natural team ready to take over.  Various producers and writers tried, and there were smaller successes, but the last five years at Motown saw the group floundering, with only a few more songs hitting the charts.  Some of those were terrible choices, most notably attempts at recasting the group as mellow interpreters of hippie-soul, with Still Water (Love) the worst of that.  Then there were the covers.  H-D-H had done a great re-working of Walk Away Renee before they left, but trying that again for the execrable MacArthur Park was a slap to the group's standards.  A series of duets with the Ross-less Supremes provided better fare, but the days were numbered, and the group left for renewed success in mid-70's with other labels.

This is a tremendous package, collecting every Motown A and B-side, including 14 England-only sides, where the group enjoyed bigger hits than the U.S. in the later years.  Of course all the great ones are here, but the b-sides offer up almost as many excellent performances, showing how deep the well was.  Similar sets that present A and B-sides in order suffer from quality drops on the flip sides, but not here, and even into the non-HDH years there are decent numbers.  The three CD's come housed in an over-sized hardbound package, with extensive liner notes for each track.  It's the way you want to own these great songs, housed with all due respect.  Similar packages have just been issued for Martha Reeves & the Vandellas, Diana Ross & the Supremes, and The Temptations.
Posted by Bob Mersereau at 7:40 PM