MUSIC REVIEW OF THE DAY: THE BESNARD LAKES - UNTIL IN EXCESS, IMPERCEPTIBLE UFO 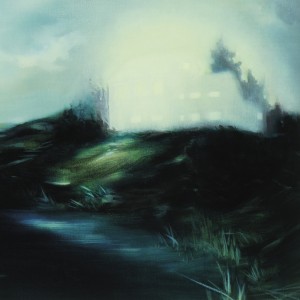 Spacey? Oh my yes, as the Montreal group get further out there, while still hanging onto a tether rope tied to a bit of rock structure.  It's dreamy, pretty, but a little spooky too.  Despite all the lovely sounds, there's an edge, always some undercurrent of distortion or noise threatening to grow louder.

Each song is like a big, fluffy pillow, with either Olga Goreas or Jace Lasek singing on top. Instead of the verse-chorus-verse, the layers are added, guitars and keys sail in, get echoed and multiplied, gently distorted and sail away again, revealing more vocals.  Lasek sings the number with the most Beach Boys influence, The Spector, a match for Brian Wilson's Feel Flows, "Can you hear me knocking?/From the other side of the beach".  No room for raucous guitars on that one, but there are plenty of others where hypnotic and tough lines show up, including At Midnight, which is Crazy Horse aboard the space shuttle.

Really, it's not fair to count off the influences and elements the band brings in, because it's a buffet, beauty in one row, textures and sounds in the next.  Analog synths get a real workout, but you'd never call them a synth band, with the basic guitar-bass-drums-vocals on each number.  Nor are they a guitar band, but there's certainly a ton of that.  They are just plain imaginative, with great ears for sounds and treatments that keeping taking each song to the next level.  And Her Eyes Were Painted Gold has some amazing vibraphone and xylophone parts that blend perfectly with the vocals, as they take over from the previous lead instrument, distorted guitar.  See, there's that beauty/edgy blend again.  The sky's the limit, and maybe not even that.
Posted by Bob Mersereau at 8:30 PM