MUSIC REVIEW OF THE DAY: STEVE EARLE & THE DUKES (AND DUCHESSES) - THE LOW HIGHWAY 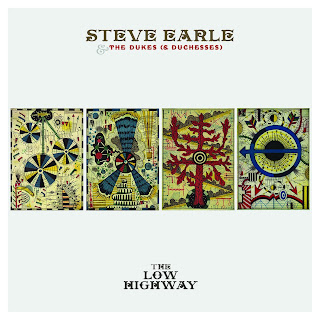 Name-checking his close-knit touring group in the title, this album reflects Earle's live  set-up these days, a set of roots-folk-country-rock that gets back to his core music.  This is his first disc he's done with just the Dukes (and Duchesses), and comes directly from their hard-touring schedule of the past few years.  There's the acoustic weariness of the title cut, a view of the more desperate times in the U.S. via the road.  Calico County takes the opposite approach, a guitar rocker from a rough redneck's life, "Friday night dogfight suckin' on a meth pipe".  Earle's characters aren't pretty, because a lot of what he sees isn't.


Small towns have changed, and not for the better.  One guy's so rattled by this, he's "thinkin' 'bout burnin' the Walmart down."  There's a rollicking New Orleans number, pure defiance from that beleaguered city:  "Gonna spoil my day/Give it your best shot/Another hurricane?/That all you got?"  The band really cooks on the very old-fashioned Love's Gonna Blow My Way, a parlour jazz number with old-time fiddle from Eleanor Whitmore.  For those Treme fans, those numbers and another New Orleans one, After Mardi Gras, are all from the TV series in which Earle stars.


He tells it like he sees it, whether it's his tale or other folks.  Pocket Full Of Rain is his look back at his drug days:  "Yeah I can still remember when it used to kill the pain".  It's not all misery though, and in 21st Century Blues, he sums up living today with a laugh, "Have to say it ain't as cool as I hoped it'd be/No man on the moon nobody on Mars/Where the hell is my flyin' car?"  Good point, Steve.  The times may have failed to live up to expectations, but this is the Steve Earle album long-time fans have been asking for, and they houldn't be disappointed.
Posted by Bob Mersereau at 9:10 PM