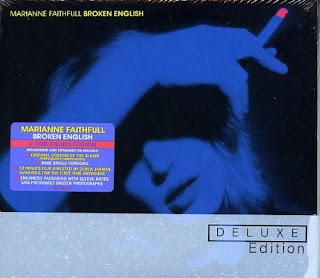 It's nice to see this back on the radar, Faithfull's surprising and surprisingly successful comeback from 1979.  It sure was a shocker, mostly for its attitude and language.  Way before Alanis Morissette was declaring her mind in striking words, and venting on disc, Faithfull was making it all real.  Her cover of John Lennon's Working Class Hero was already loaded with the F-word, but former 60's naif Faithfull made it seem even tougher.  Most powerful was Why'd Ya Do It, her own composition eviscerating a former lover, which went even further, including both of the nasty C-words, and the very rare S-word. Well!


It's a pretty good album overall, with the title cut a great groove, and her take on Shel Silverstein's The Ballad Of Lucy Jordan also a charm.  The other four cuts are more rote, as the producer Mark Miller Mundy attempted to find a way to update her sound through synthesizers, which was only partially successful.  In truth, it was her wrecked voice that was all that was needed.  Being an addict living on the streets will do that.

This two-disc set includes a wealth of bonuses, including the original mix of the album, which had, hmmm, less synth and more guitar.  I like it better.  There are also three more versions of Broken English, and a longer mix of Why'd You Do It, fair enough.  The more interesting inclusion is her own recording of Sister Morphine, the Stones cut for which she had belatedly received writing credit.  The drug sorrow would haunt her through the 70's, and really only came to light when people heard this album and found out what she'd gone through after leaving the Stones orbit.
Posted by Bob Mersereau at 2:49 PM