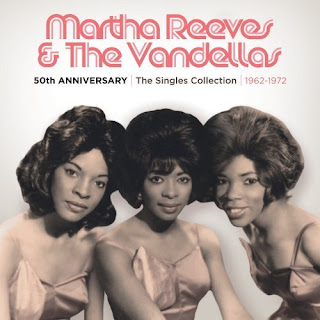 The next installment of this terrific new birthday series from Motown.  These are 3 CD sets, including every A and B-side recorded for the label.  There's a big bonus with this one as well, since the 45 sides only filled up two discs.  Disc 3 is a treasure-trove of all completely unreleased tracks covering the group's entire history.  More on that in a moment.


Although known for a good handful of huge hits, The Vandellas remain criminally underrated, and really were undervalued even back in the day.  Although for a short time they were the label's top female group, they were overtaken by The Supremes, and stayed in that group, and Ms. Ross's mighty shadow for the duration.  But not only were some of Motown's greatest songs and productions done for group, most of their B-sides and failed 45's were gems too.  That makes this set especially tasty.


It didn't take the group long to get up to speed.  After a failed debut in 1962, they broke into the Top 40 with their next one, Come And Get These Memories.  Berry Gordy has always claimed that was the song where the Motown sound finally came together, thanks to a great production from writers Holland-Dozier-Holland.  The Funk Brothers slip into an easy groove, the Vandellas do great harmonies, and Martha Reeves slides high and low, a distinctive and classy voice.


In those days, if you had a decent hit on the label, they'd keep the team together to see how long the magic would run.  Good thing, because next time the H-D-H team delivered the exciting Heatwave, as infectious a track as has ever been made.  It's hard to decide what makes this song, the driving tempo, the combination of piano and drums, the clever lyric or the urgent vocal.  The excellent b-sides start here as well, with the country, blues and jazz touches featured in A Love Like Yours.


Quicksand was next, repeating the formula and beat of Heatwave, a typical tactic of the day, then the smart Live Wire followed.  Oddly, In My Lonely Room didn't hit, and that meant a change in writer-producer teams was in order, per Motown's tactic of shaking things up after a failure.  So in came Mickey Stevenson and Ivy Jo Hunter.  They brought with them a tune they'd been trying to cut with Marvin Gaye, who had written some of the lyrics.  There are many excellent Motown hits from this era, and you can start a great argument among fans trying to pick the very best, but certainly Dancing In the Street would have as good a claim as any.  It has the best opening flourish, and the best opening lines:  "Calling out around the world, are you ready for a brand-new beat?"  It is song that you want to hear over and over again, even though we've all heard it hundreds of times.  And then it ends too soon, you want it to keep going.  And how about that big beat that accents the whole track?  The excellent liner notes hear tell us that it was Hunter whipping snow tire chains against a piece of wood, a chore so demanding his hands were bleeding.


Now Stevenson had the hot hand, but H-D-H weren't exactly hurting.  They were starting to score with The Supremes, and unfortunately for The Vandellas, many of the best girl-group songs went that way.  While the trio of writers did send Nowhere To Run to The Vandellas, and the group was still getting great material from others, the spotlight had shifted and their records were getting shoved aside for the latest Supremes hit.  A great example of that is the fate of the H-D-H track Jimmy Mack, recorded in mid-1964, but ignored by the brass.  Finally, Reeves had enough of the lack of attention, and appealed to Gordy.  Stunned to hear the cut over two years later, he ordered it out, and in went Top 10 in 1967.


But H-D-H left the label, and Motown was changing.  Despite great material and performances, superior cuts such as I Can't Dance To The Music You're Playin' and Honey Love couldn't break into the Top 40, and slowly but surely, the group fizzled out by 1972.  Of course, we're just talking chart numbers (and sales) here.  For listeners, there are even greater benefits here, because the songs are uniformly strong, and certainly unfamiliar to most.  Therefore disc two is just as fun for the discoveries.


Now here's what really blows me away about this set.  Motown has already released an entire two-disc set of vault recordings of Vandellas material, plus assorted odd cuts on a variety of CD reissues over the years, and somehow they've managed to find another complete 75-minute CD of even more unheard tracks.  And it's all great!  There are cuts here that could have been hits, and certainly nothing that couldn't have been put out on albums.  There are songs by the A-list writers and producers, plus fascinating covers.  How about The Doors' Light My Fire, in a completely different arrangement?  My favourite is a 1965 cut called S.O.S. (Girl In Distress), the title alone worthy of attention.  A little perspective is in order.  We're talking about a company of about 200 people, pumping out recordings at a phenomenal rate, with accomplished playing and unique ideas.  They would do these sessions in mere hours, and then shelve half of them, the slightest imperfection that might keep them off the top of the charts enough to doom them to obscurity.  With the stable of artists at the label, we're talking thousands of cuts over the golden years of Motown.  Yet we all marvel over the slim output of any number of superstar groups, like they're God's gifts to songwriting.  This country just gave the Juno Album of the Year to Carly Rae Jepsen.  I think I can, and might, just listen to Motown for the rest of my life.
Posted by Bob Mersereau at 10:14 PM