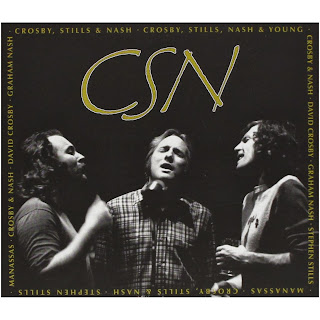 This is a straight reissue of the 4-CD box set, from 1991, except in smaller packaging.  And why not?  It's a good one, and let's be honest, there's not much the trio have done on their own or separately that needs to be updated since then.  And disc four of this was already a bit spotty, as the 80's weren't exactly kind to them either.  You could pick apart what happened to them, but let's just say, for at least Crosby and Stills, there were copious amounts of drugs involved.  Too bad, but we shall revel in the late 60's and 70's output at least.

The early 90's were the heyday for box sets, and the best ones were bonanzas.  Thanks to the Dylan and Clapton examples, boxes came filled with previously-unreleased tracks, many of them wonderful treasures we didn't know existed.  The big attraction here were CSNY cuts (of course), and there are several, either different mixes or versions, and even a couple of heretofore unknown ones.  Highlight #1 is the cut Horses Through The Rainstorm, a Nash songs written with Terry Reid, that the group deemed too pop for Deja Vu.  Balderdash I say, it's a keeper, and wasn't Our House light and breezy too?  Then there's the studio version of The Lee Shore, a number previously only found live, on Four Way Street.  Not the strongest Crosby number, but as always the vocals our sublime.  Man In The Mirror is a live version of the Nash solo cut, on a CSNY tour.  See The Changes is a CSNY take from 1973, from one of the several aborted sessions they did, trying to get back together.  Best of all those is Homeward Through The Haze, another one-off session in 1974, the track later reclaimed for a Crosby/Nash album.  It's just the four of them, voices and acoustic guitars, still with the magic.

There are plenty more previously unreleased tracks here, including different mixes of the group's first two, classic albums (Crosby, Stills & Nash, Deja Vu).  For the most part, the compilers did a fine job including all the various other releases over the 70's and 80's, finding the best as the quality diminished.  Stills has the best solo work, especially his Stills album, and the Manassas project with Chris Hillman and various others, but also crashed the worst, down to the unlistenable Thoroughfare Gap album of 1978.  I especially like the CSN album cuts from 1977, not the album everyone hoped it might be at the time, but there's some nice stuff there, and I always thought Just A Song Before I Go was a great little number.  Some box sets have too few cuts or miss some key ones, and others have way too much.  This one came out just right.  Oh, it's also half the price I paid for it in '91 now.
Posted by Bob Mersereau at 2:53 PM