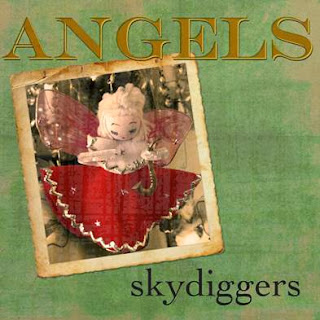 Let's get the Christmas album season in high gear.  There's been quite a few released this year, and while as usual most of them look pretty standard (full of standards) and some quite awful (most of the celeb/country ones), there are a few well worth mentioning.  Skydiggers is certainly one of the latter, a lovely little project to wrap up the group's 25th anniversary celebrations.  Each season this of 2013, the 'diggers have released a new offering to honour the birthday, and it ends with this five-track EP of festive numbers.  We get two covers, two traditional songs and a surprise new offering.

Joining mainstays Josh Finlayson and Andy Maize for this collection are friends and touring band mates, plus a welcome back to departed but still contributing member Peter Cash, who also did a special anniversary show with the group earlier this year in Fredericton.  Bumped up to the top ranks is singer Jessy Bell Smith, more and more a featured performer live and now on disc.  Here she handles duet vocals with Maize on all the tracks, and takes the lead on John Prine's Christmas In Prison.  She also chimes in nicely behind Maize on the other modern cover here, The Pretenders' favourite, 2000 Miles.  Both are strong choices, not often covered so we're not sick to death of them.

Of the traditional songs, Good King Wenceslas is pretty common, but not by the rock/roots crowd, and it's cool to hear it as a guitar song.  Maize puts a lot of soul into it, vocally and with a good turn on trumpet too.  Bonus marks for picking one of my very favourite carols.  This one's been out before, but here has a new mix by Cowboy Junkies' Michael Timmins.  Poor Little Jesus is nicely obscure, and the band does a grand job turning it into an Emmylou Harris kind of number.

The wild card is perhaps the only song ever written by two sitting members of Parliament.  Church Bells Ringing comes from NDP'ers Charlie Angus and Andrew Cash (Peter's bro).  Set in Toronto on Christmas Eve, it's a lonely night on Dundas Street, church bells not helping, another city guy wishing he was home, which could be the church or could be the town he's thinking about.  It's a gem and final proof there's soul in the House of Commons, even these days.
Posted by Bob Mersereau at 10:12 AM