MUSIC REVIEW OF THE DAY: VARIOUS ARTISTS - SONGS FOR SLIM 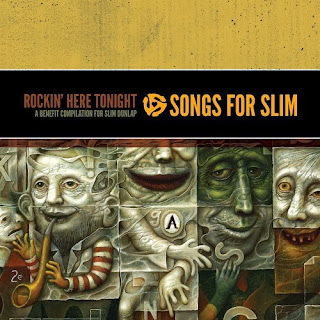 Hey, why not do something nice with your CD money this Christmas, and order a disc that's going to help a fine musician?  Of course, buying any CD helps an artist, but here's one in rough shape who could use a hand, and you get some excellent music as well.  I know, these benefit collections can be a little weak sometimes, but not this one.  Slim is Slim Dunlop, lead guitarist for The Replacements, beloved by more than a few for their late 80's to early 90's sloppy but poppy, aggressive albums.  Dunlop suffered a serious stroke in 2012 that has left him in need of 24-hour care for the rest of his life, an extremely expensive proposition.

Enter his musical friends.  At the start of 2013, a series of singles started appearing, one a month, in extremely limited quantities.  Each came with unique artwork on the sleeve by Replacement Chris Mars, and were only available by auction.  Stars and pals lined each side, starting with The Replacements, Paul Westerberg and Tommy Stinson and a couple of ringers (Mars didn't want to get back into music).  The 45's brought in huge bucks, as fans and collectors leaped at the offerings.  Now that the run has ended, you can buy all the songs on this CD, as well as get a second disc of unreleased cuts also considered for the 45's.

Almost all the songs were written by Dunlop.  He had his own solo career going, and despite being in Westerburg's shadow all these years, was a fine writer in much the same vein.  In other words, if you like The 'Mats, dig in, and dig some of these folks.  There's Lucinda Williams, sounding like she would have been right at home in The Replacements.  Steve Earle gets in the spirit, coming pretty close to his old wicked ways.  Jakob Dylan is a revelation on Ain't No Fair (In A Rock 'N' Roll Love Affair), growing growly and seedy.  And check out Jeff Tweedy, with his son Spencer on drums, doing the best song on the set, Dunlop's The Ballad Of The Opening Band, a tear-jerker about the guys who never make it past the club scene.

The ones who didn't make the singles turned in fine work too.  A Woodstock bunch called The West Saugerties Ale & Quail Club get their neighbour, The Lovin' Spoonful's John Sebastian, to join them on harmonica on one of Slim's favourite songs, an old James Burton instrumental called Love Lost.  Mars shows up, paying tribute to his pal with a number he wrote in response to Dunlop's stroke, called When i Fall Down.  And there's a second version of The Ballad Of The Opening Band, by an outfit called LP.ORG.  Don't be fooled, because when you open the credits, you find out it's pretty much The Jayhawks, Minneapolis brethren of Dunlop's, doing another stand-out job, almost the equal of Tweedy's.  This has been a huge success as a fundraiser so far, and the musical results are just as good.
Posted by Bob Mersereau at 6:15 PM