MUSIC REVIEW OF THE DAY; ORIGINAL SOUNDTRACK - INSIDE LLEWYN DAVIS 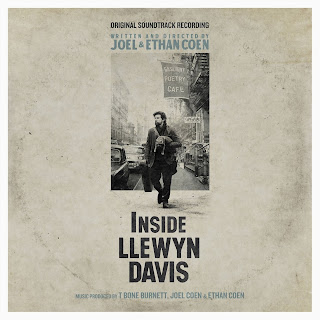 I still haven't got my head around the Coen Brothers making a film about the folk music world of the 50's and 60's, but at least I figured the music would be worth it.  Ably assisted by T Bone Burnett, the soundtrack features a mix of period recordings and brand-new music created and performed for the film.  Not just lip-synch'ed either; the Coen boys insisted on filming actual live performances, which meant they had to have actors who could pull that off.

The gem of those is Oscar Isaac, who plays the Davis character.  He has the voice to pull off these numbers, sounding very much like the type of performer found in Greenwich Village in those days.  The Davis character is based on Dave Van Ronk, one of true talents and great characters of that scene.  One of his live cuts, Green Green Rocky Road, is also found here.  The music side is beefed up by some major modern talents, including The Punch Brothers, Nancy and Norman Blake with Gillian Welch and Dave Rawlings, and a full associate producer credit for Marcus Mumford, who arranged and performed some of the cuts with the actors.

You'll have to remember it's a movie, and the soundtrack gives you a sampling of the styles you'd find in those times.  The overly-earnest reading of The Last Thing On My Mind by Tom Paxton, as performed by Stark Sands and the Punch Brothers, is the kind of commercial folk aimed at a broad audience when the scene took off thanks to the Kingston Trio and others.  There's even a political comedy number, Please Mr. Kennedy, featuring co-star Justin Timberlake.  The treacle is there for film reasons, and can still be enjoyed.

Then there's the elephant in the room, and the soundtrack tackles the Dylan issue by scoring a coup.  They got the rights to use an unreleased studio take of his song Farewell, previously only found on one of the Bootleg Series discs, in a different version. One hopes, and expects, they've done as fascinating a job with the film as they have with the soundtrack
Posted by Bob Mersereau at 9:00 PM