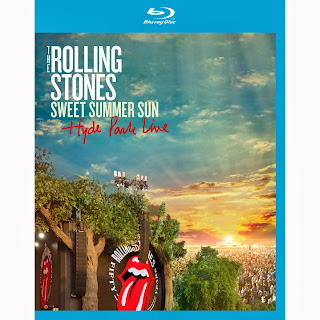 One of the nice things about having a birthday at Christmas time (two days before) is that I get to start opening gifts before the rest of you.  I don't get the most extravagant presents, as close family members usually figure they are going to be spending on me twice, so they give the little one for the birthday, but that's okay by me.  Because often, the little one is music.

This time, among other things, I picked up the new Stones concert flick, Sweet Summer Sun, Hyde Park Live from this year's 50th reunion shows.  After playing select North American dates, the Stones brought it all back home, returning not only to London, but to the site of their famous 1969 show.  That one had a lot of meaning, being the first for new guitarist Mick Taylor, the first since the death of founder Brian Jones, and pretty much the British Woodstock too.  There were lots of highs and lows that day, and supposedly the sound stunk and the band wasn't much better.  No matter, it's a piece of music history now, and this set meant lots to both the audience and the band.  Who would have thought the Rolling Stones could have a sentimental side?

The two-plus hour show pretty much boils the Stones down to what they've been the last 20 years or so.  The set concentrates on the middle, glory years with the big songs, Street Fighting Man, Jumpin' Jack Flash, Sympathy For The Devil, Brown Sugar, You Can't Always Get What You Want.  Start Me Up is the opener, Satisfaction ends it, there are a couple of nods to earlier days with Paint It Black and Ruby Tuesday, and not much past 1980, aside from an obligatory stab at a new cut, this time Doom And Gloom.  Keith gets his mini-set, including Happy.  And that's what everybody is with that safe setlist.  So the only real questions left are whether this time they can still do it, and what shape are they in?

Mick looks great, a poster boy for geriatric health.  He's not lost a step, perhaps only his leaping ability is lessened.  His voice still sounds great, but it's a bit thinner now.  He leads by example and charisma more so than vocal strength.  Keith, well, he never was the picture of health, but it's quite amusing to see his facial features starting to sag, his nose puffy, and his ears sticking out.  And he's put on some stomach weight as well.  I'm not trying to be catty here, it's a DVD you know, and the visual is a big part of it.  Ronnie could pass for a 1975 version of himself under the right light, and Charlie's kinda seemed like a senior citizen since the 80's anyway.  The stage set, and the entire setting are quite attractive, a woodland space filled with over a hundred thousand, and a matching creation, with its own forest motif for Mick to frolic in.

There's not a great load of drama passed on in this film, and for the big 50th shows, perhaps it's even a bit of a let-down, because there were several of them, and the group certainly hasn't called it quits.  So really the only theme present is the return to Hyde Park, isn't that cool?  As for guest stars, thankfully none of the young divas that Mick likes to invite were present, only Mick Taylor got to share the limelight, fittingly so.  The concert had been a kind of rote affair until then, and his presence did seem to goose everybody a bit mid-show.  They should have let him stay on for more than two numbers.

It's well-shot, the sound mix is excellent, the scenery great, there's some really good montage work with Stones fans showing off their t-shirts and tattoos.  It's not the group's greatest performance of course, and it could have done with a couple more surprise song selections, but not a bad way to wind down after a birthday feast.  Maybe you'll get this in your stocking.
Posted by Bob Mersereau at 3:39 PM