MUSIC REVIEW OF THE DAY: JIMI HENDRIX - HEAR MY TRAIN A COMIN' (DVD) 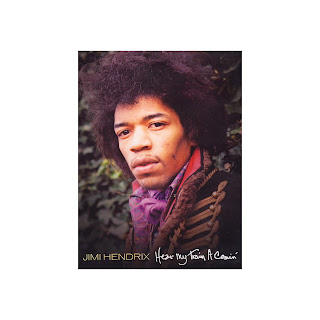 This is the documentary recently shown on PBS, covering birth to death in two hours.  Filled with friends, band mates and family, it's somewhat clean and nice, with Hendrix portrayed as a genius guitar player, humble and prolific, the message being he just wanted to make music.  There's nothing particularly new in the story, although the footage is prime, lots of rare film of important concerts, from his breakthrough days in England down to his last appearance in Germany just days before his death.  If you don't know the Hendrix story, this is an excellent way to be introduced.  If you are familiar, it's the visuals that will keep you interested.

The star interview is from Paul McCartney, who does an excellent job explaining Hendrix's explosion on the English scene, and how hip London fell in love with him.  McCartney saw it all, from his debut club performance to his first major London theatre gig, and it's rare the Beatle speaks in awe of contemporaries, being as he was pretty much top of the heap.  His enthusiasm gives you a great indication of how perfectly Hendrix captured the English scene.  His take-over of the U.S. was a bit slower, and the film makes a good point that Monterey Pop only opened the door, but it took months of constant touring to really achieve top star status.  By 1969, he was the top concert draw in North America, the key player to make your festival a success.

None of the really touchy stuff is explored here; the drugs are referenced, but only casually.  The money, the management, and the messy legacy of legal disputes, overdubs, reissues and such is not even brought up, as the film ends with his death.  Even that is not even explored, the cause not mentioned.  We're left with this picture of a giant who walked the earth briefly, amazing all.  The only negative, and it's a minor one, comes from producer/discoverer Chas Chandler, who split with him over the amount of takes and re-takes he was doing, just because he was bored.  Dirt, you won't get, thanks to this official family portrait.  Still, their point is simple, the guy was a wonder.

The film itself is a keeper, and you get a ton of bonus footage with the DVD.   There are three different concert appearances, four to six songs each:  Miami Pop Festival in 1968, New York Pop Festival in 1970, and the newly-found footage from that final Germany show, September 6, 1970.  None of it is pristine but in some ways it's more special than professional footage, knowing we're lucky to have it.  A final bonus is a Top Of The Pops appearance from 1967, doing Purple Haze, Hendrix as absolutely cool as can be.  At three hours in total, this is a prime package.
Posted by Bob Mersereau at 9:00 AM