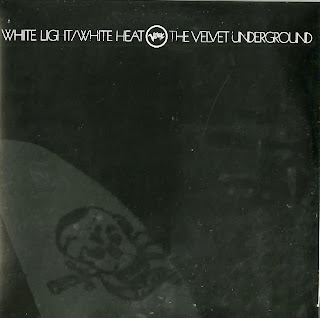 An expanded, two-disc version of The Velvet's second album, but don't think it's a quick cash-in on Lou Reed's death.  It was planned well in advance, as the work on the V.'s catalogue has been on-going.   There's even a recent interview with Reed in the booklet regarding the work, as well as quotes from the others.  Not as beloved as their seminal debut, the "Banana Peel" album with Nico, it's more in line with what the band was about, especially as a live act.  There's lots of distortion and noise, droning and drawn-out numbers, spoken word and individual assaults on the equipment.  Reed called it the first punk album, and has nothing but praise for it, mostly for its brash intensity.

That confrontational feel will either turn you on or leave you upset.  These are not tight songs, and even the single, title cut is more about the amp noise than the bouncy rock, which Bowie played up on his famous live versions.  At just six tracks, there are some long, long passages, explorations of sound and repetition.  Sister Ray is a Reed rant;  The Gift a university short story written by Reed, recited by Cale with his Welsh accent, accompanied by the band.  When there are more concise songs (Here She Comes Now, I Heard Her Call My Name), again the volume level overshadows the structure and melody.  With its free jazz influences and street punk attitude, it was far ahead of its time, and still manages to be confrontational.

The bonuses are plentiful, with disc one filled out with seven cuts down post-album, the last recording sessions will Cale, familiar to major fans but placed in context here.  They include an alternate take of I Heard Her Call My Name, and the first take of Stephanie Says.  Disc two contains the full show from  April 1967 at New York's Gymnasium, which was sampled on the box set Peel Slowly And See.  A bit above bootleg quality, this is the best indicator of what the original band was about, with Cale's keyboards and viola getting workouts, the droning passages extended on stage, long instrumentals, tension and probably about 10 people in the audience getting it.  Such was the birth of something very important, although still after all these years, not entirely understood and certainly only for those who get it.
Posted by Bob Mersereau at 1:07 PM