MUSIC REVIEW OF THE DAY: THE WHO - TOMMY SUPER DELUXE EDITION 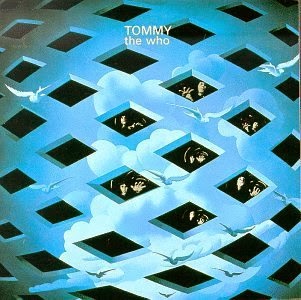 Ah, Thomas.  That's how The Who referred to it, mocking its opera importance.  The war horse has held up surprisingly well, its reputation still solid in its fifth decade.  Long familiarity has drilled the plot home to us, and the movie certainly helped explain the story lline.  We don't have to think and listen at the same time to catch the plot.  When you can just sit back and listen, it's a grand album, lots of instrumental glory, some great anthems, a bit of humour and a surprisingly fluid pace from start to finish.  Townshend, despite the pressures, really pulled it off.

Read all about the trials of being the leader/writer of The Who in 1969 in the excellent hard cover book included in this four disc box.  Echoing the previous packages done for Live At Leeds and Quadrophenia, you really get a solid set, the packaging alone probably costs $30 to manufacture.  Then you get Tommy four different ways:  The album remastered on CD, another with a brand-new Blu-ray mix, then a full live reading taken from various concerts in 1969, and finally the album as heard in Townshend's famous demo recordings, a job at which he was a master.

The live CD is a terrific listen, the band able to recreate this complicated, long work with unflagging energy and full dynamics, considering there were just the four of them.  Daltry is front and centre, but Townshend is co-lead singer, taking songs such as The Acid Queen, to promote Daltry as the Tommy character.  When they cut through with Pinball Wizard, it's a thrill, even in your living room.  As fans of Who lore will know, each Tommy show that year was recorded for a live album, but after listening to hours and hours of shows, Townshend got bored and decided to just record at Leeds instead.  The story went that he told the sound man to dump the tapes in the landfill.  It turns out that wasn't true, and although they are a little under top fidelity, it's quite listenable and the editing is great, making it seem like one complete concert.

The demos are fun as well, with some variations from the final product, which was altered for late lyric upgrades during the studio sessions.  Interestingly, there are almost completely different demos that the ones found on the 2003 double CD reissue, only three of the 25 cuts previously released.  This means completists now have to own both versions, but it's a case of the more the merrier in Whoville.

I don't imagine you'll see this set come out cheap for Boxing Day sales.  They cost too much to make, from the mixing and mastering, the compilation of the book, and the expensive, thick packaging.  However, you won't question its value once you hold it and listen.  It took two hours to read the book, four hours to listen, and I'll be playing that live disc more than a few times.