MUSIC REVIEW OF THE DAY: HOWIE GELB - THE COINCIDENTALIST 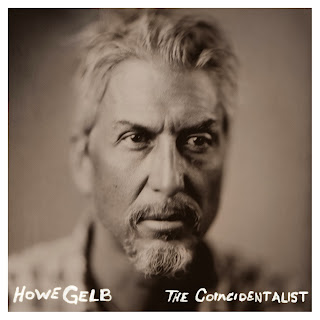 I don't know about you, but if I hear one more jazz-folk-country-lounge-poet from the desert, well...  that will be two.  Gelb is pretty much on his own over his massive career, on his own or leading Giant Sand (or Giant Giant Sand), and he pretty much sums up his idiom here.  It starts with "Well...welcome to the desert," and then the wry humour begins:  "It's become increasingly more expensive...".  The setting drives the sound, which is wide and open, shifting like the sands, never standing still in one musical form.  What does stay still is Gelb's own take on singing, which is half-whispered, half-spoken, and the other half kinda sung, somewhere between older Leonard Cohen and younger Neil Young.

As usual, guests help out, including Bonnie "Prince" Billy in a duet on the first cut, Vortexas, and the delightfully out of place KT Tunstall on another, throwing things further off-center.  M. Ward is along on guitar, Andrew Bird on violin, and an actual jazz bassist in frequent colleague Thoger Tetens Lund, who gets to pluck away on stand-up on the jazzier cuts.  When I say jazz, it's more like demented lounge playing, sounding like guys who have been playing the same hotel bar for the same 20 drunks for way too long.

As for the concept, it's something about grabbing onto coincidence when it happens, and allowing it to lead the way.  This phenomena seems to happen to those living in Vortexas, which is more a state of mind than the 51st member of the union.  Really though, don't worry about it, the idea is to enjoy the language, not the meaning, the same way the Coincidentalist goes along with coincidence but doesn't search for the meaning of them.  Or, you can just wonder, who the heck is this guy?  For my money, he's the top desert-based jazz-folk-country-lounge poet working today.
Posted by Bob Mersereau at 5:05 PM