MUSIC REVIEW OF THE DAY: NEIL YOUNG - LIVE AT THE CELLAR DOOR 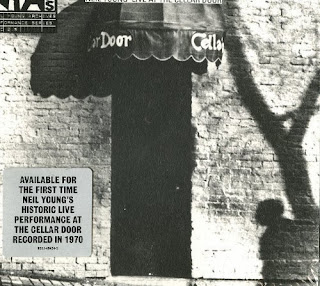 How can Young give us Archives Box 2, when he still keeps adding to Box 1?  This latest addition is a 1970 solo album from a Washington, D.C. club, Young on a tour playing just acoustic guitar and piano.  He'd just released the splendid After The Goldrush, most of which lent itself to the solo treatment, so we get fresh versions of those classics, a walk through some older classics, and typically for him, three songs that hadn't been released at that point.

Young has already released a solo acoustic record from this tour, Live at Massey Hall, recorded just a few weeks later.  Do we need two?  Well, the set list is almost completely different.  Back at the Cellar Door, in the last few days of November and early December of 1970, he was still concentrating on After the Gold Rush, playing the title cut, Birds, Tell Me Why, and Only Love Can Break Your Heart.  By January of 1971, he'd moved on to early versions of songs that would make up the next disc, still a year away, Harvest.  Such was the rate songs were pouring out of him at the time. Two albums' worth, plus several more that didn't make the cut at the time.  Here we get the playful Bad Fog Of Loneliness, a live favourite that wouldn't see the light of day until the Archives Box, plus See The Sky About To Rain, which would be held until 1974's On The Beach.  And the Harvest songs were already creeping in here, an excellent version of Old Man, fully written by this time.

About half of the songs are done at the piano, Young telling the audience he'd only been playing seriously for about a year.  You can tell, as he sometimes searches for the chords.  It doesn't hurt the performance though, as the shaky nature has always fit him well.  He adds some drama to Expecting To Fly, hammering on the important chords at the end for dramatic effect.  The biggest surprise comes when he plays, for the first time, the guitar burner Cinnamon Girl at the keys.  It's the sloppiest number here, but also the most musically intriguing, with some pretty interesting chords being used to replace the famous riff.  It may be better on guitar, and better still with Crazy Horse, but this a fascinating version, especially given the number of times we've heard it with electricity.

As for the format, I'd pick up the 180-gram vinyl copy, a lovely and warm-sounding album, which will take you back to the days of spinning Young's classics on your table.  It's only fitting.  Here's hoping there are more and more of these Archive releases, as virtually every era of Young's touring career reveals something vastly different.
Posted by Bob Mersereau at 11:02 AM