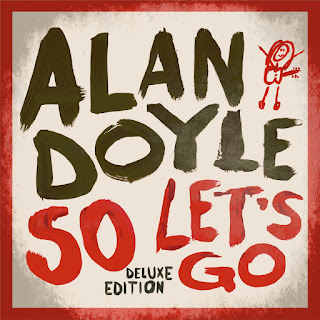 Alan Doyle put out this strong collection earlier this year, and has been touring with his crack band, mixing the new stuff with his well-loved Great Big Sea shanties. Now it gets a boost to deluxe status, with the addition of three tracks, plus a video.


Doyle has formed a good bond with Barenaked Ladies over the years, and is currently touring with the band. Their lead singer, Ed Robertson, guested on the fun single 1,2,3,4 from this album originally, and now it gets a new mix for the tour, with Ed's part a little more prominent. It's a classic BNL suburban guy rap, so that's entertaining. Plus, a new video is included, which is a nice bonus.


The other cuts include a strong ballad, called I Am A Sailor, which easily could have been on the main album in the first place. But the big gem here is a live version of the previously unreleased Dream Of Home, a song written way back in 2010 for the Robin Hood movie, in which Doyle acted and contributed soundtrack songs. However, this number was dropped. He performs it a cappella in concert, and here we got a stirring version recorded in Halifax earlier this year.


And in case you missed my original review of the album, here it is again.


This is Doyle the songwriter, a modern Newfoundland sound he was largely responsible for creating and popularizing. So Let's Go features 10 original cuts, with that blend of old instruments and sounds, with full production and pop/rock attitude. No, no shanties, no donkey riding, no 1830's, it's all today, but unmistakably the classic voice and sound of the same Alan Doyle we've known for 22 years. There's lots of strumming of acoustic guitar, bouzouki and mandolin, plenty of accordion, big group backing vocals, hand claps and stomps. The biggest addition is the fiddle work of Kendel Carson, a key member of Doyle's new touring band. In all, a souped-up version of the trad pop GBS sound.


Sins Of Saturday Night, produced by and co-written with Gordie Sampson, has some new country hints with a big rock chorus, crafty enough to mix a sharp lead guitar with Carson's fiddle. The title cut has a happy whistling-and-mandolin chorus, which builds into a big celebration, sure to be a new concert favourite. It's quite impressive how rocking he can make a song built on a mandolin riff, like The Night Loves Us. And even an acoustic ballad, Laying Down To Perish, gets a major treatment, with martial drum beats, soaring whistles and what might be seagulls in behind. This will easily appeal to all who have followed GBS, and might very well interest a whole new generation in this Newfoundland hybrid.
Posted by Bob Mersereau at 9:41 PM