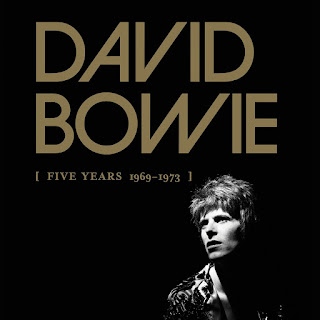 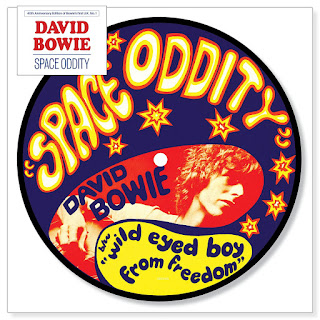 There's no end in sight to the reissues and repackages of David Bowie's classic catalogue. The guy may not have invented reissue campaigns, but he sure has maximized and monetized the potential. Remember, Bowie's the one who sold bonds which used sales of his albums as collateral. This guy knows the value of Ziggy Stardust.


Each Bowie album has been re-released two or three times each, some with bonus cuts, some in anniversary boxes, some with remixes. What this does is collect everything from his first major period, the 1969 - 1973 era, from Space Oddity to the retirement of the Ziggy persona. Each album is here, all the b-sides are under one roof, the previously-released remixed audio, and some brand-new sonic upgrades, so that each album is now available in best-ever audio.


The packaging is first-rate, with a deluxe cube box holding the CD's, and a lengthy hard-cover book with write-ups on each album, tons of photos and a sincere tribute from Ray Davies to open things. Each CD comes in a mini-sleeve replica of the original albums, including inserts, and even includes protective rice paper mini-sleeves for the CD's. It's nice not to feel like corners have been cut, when you're paying top dollar.


I don't think I have to go through the quality of each studio album, these are well-documented. But many fans won't have the two live albums included here, Live Santa Monica '72 and the soundtrack to the movie Ziggy Stardust and the Spiders From Mars, and both are tremendous. Santa Monica was from the heyday of the Ziggy era, on the first tour of the U.S. It has a few flaws, as it was a radio broadcast first, released decades later on CD, and has some blown lyrics and dicey solos at times, but mostly this is a band on fire, holding nothing back.


The Ziggy soundtrack was the last-ever show for the Spiders, Bowie surprising everyone, including the band, by announcing the group's demise just before the encore of Rock 'n' Roll Suicide. Too bad, they sound even better here a year later, Woody Woodmansey absolutely pulverizing the drums. Mick Ronson has to be heard live to appreciate his role in the Ziggy sound. These discs should increase the draw of the box for many folks.


The B-sides collection is a double-CD set called Re: Call 1, which hints at further collections, perhaps even further boxes. What you get here is actually pretty familiar to most Bowie fans, songs that have graced many packages, dating back to Changes 1 Bowie and showing up on various reissues, box sets, etc. There's only one previously unissued track in the bunch, and that's simply a mono mix of All The Madmen. You get all tracks such as Memory of a Free Festival, the track from Man Who Sold The World, but reworked into a two-part single. There are several single mixes that differ slightly from their album counterparts, including Changes, The Jean Genie, and Starman, where you can play spot the difference (there aren't many). Sadly, the box doesn't include all the bonus cuts issued on the Rykodisc reissue series of the '90's, which featured demos and unused album cuts. With those out-of-print, this is the one letdown here, a disservice really. They could have dumped the many slightly-edited tracks in favour of this other, far more interesting material.


Sound fans won't get better versions anywhere. Some of the remixes have been out before, such as the Ziggy and Aladdin Sane albums, but others are new to this set, such as Hunky Dory, The Man Who Sold The World and Pin Ups. Now, you can buy these remixed discs separately as well, but there is something about having them all under one set.


So you get 13 CD's here, the fine book, there's probably some stuff you don't have unless you are a big fan/collector, not bad at $169.


Oh, but Bowie reissues never stop. The ongoing 40th anniversary singles campaign has a new one as well. This time, it's Space Oddity, in the popular picture disc 45 format, backed with Wild Eyed Boy From Freecloud. Wait, wasn't Space Oddity from 1969? If it's a 40th anniversary, it should be 1975, right? Well, it was also from 1975, because it went to #1 in England that year, as, you guessed it, a reissue. See? Told ya Bowie has always been big on reissues.
Posted by Bob Mersereau at 8:26 PM