MUSIC REVIEW OF THE DAY: COLIN LINDEN - RICH IN LOVE 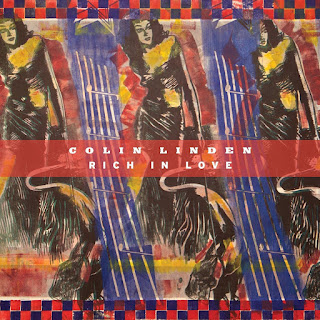 One-third of Blackie & the Rodeo Kings, an in-demand producer for the likes of Bruce Cockburn and Colin James, T Bone Burnett's go-to guy for many of his projects, as well as the performance coach and some-time actor on the TV show Nashville, it's amazing Linden has the time to still make solo discs and write all the songs too. How he's managed to pull off some of the very best of his career in the middle of all this is equally impressive.


A roots guy way before the term was popularized, Linden keeps getting deeper into the good stuff. He follows some classic themes, such as the murder ballad (Delia Come For Me) but comes up with a new twist and a modern take, never sounding retro. His interests are varied enough that he keeps us guessing from cut to cut, moving from the haunting blues of the title cut to the smooth Les Paul innocence of Date With The Stars. Billy Swan would approve heartily of Luck Of A Fool. It's well-known that Linden befriended Howlin' Wolf when he was a mere lad, and it wouldn't surprise me to learn he had his ear to the basement window when Dylan and the Hawks were jamming in Big Pink too.


Linden always makes great sounding records, but of special note this time are the lyrics, some by him, others in collaboration. Opening cut Knob & Tube, which features guest harmonies from Amy Helm and an all-smiles groove played by Linden on mandolin, features lots of plays-on-word around vintage electronics ("Make these wires sparkle around my bakelite"). The Hurt references the annoyance Etta James felt towards Beyoncè after the youngster sang her theme song At Last for President Obama at his inaugural ball. No More Cheap Wine is just great advice: "Life's too short to drink no more cheap wine." I'll drink to that, and the entire album.
Posted by Bob Mersereau at 5:24 PM