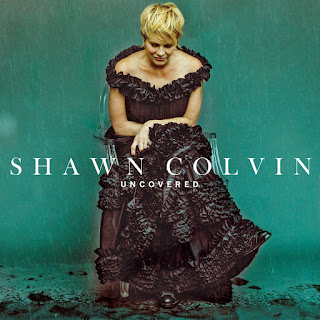 This is the second time Colvin has done a covers album, after 1994's Cover Girl.  She's well-known for playing surprising covers in concert, even though she's a highly-regarded songwriter.  It never fails to break the tension when she pulls out some well-known '70's pop hit in her live act, and she's a master at coming up with just the right ones.  However, one must also realize that covers albums are one of the few ways that veterans are able to get big-label contracts these days, as its a good bet they can sell a decent amount of units that way.

No matter what the reason, it doesn't take away from the pleasure, and Colvin has picked a fine mix of hits and obscurities, all delivered with her own stamp.  Her voice is always a joy, and hearing her do Baker Street, ably harmonizing with guest David Crosby, is a mellow treat.  Paul Simon's American Tune is pretty much part of the Great American Songbook now, and Colvin is particularly able at hitting both the low and high notes in the song.  And if you're doing covers, you better know some Creedence, said every bar band ever, so here Colvin offers up a softer take on Lodi.

On the surprise side, she digs deep into the Stevie Wonder catalogue for Heaven Is Ten Zillion Light Years Away, a grand early '70's album track that showcases his lyrical punch instead of his funkiness.  There's a tip of the hat to fellow traveler Robert Earl Keen, with his Not A Drop Of Rain, and a classic country cover for a closer, Tammy Wynette's 'Til I Get It Right.  The thing is, Shawn Colvin always gets her covers right.
Posted by Bob Mersereau at 5:50 PM