MUSIC REVIEW OF THE DAY: BILL APPLEBY - ALLEGATIONS AND ALLIGATORS 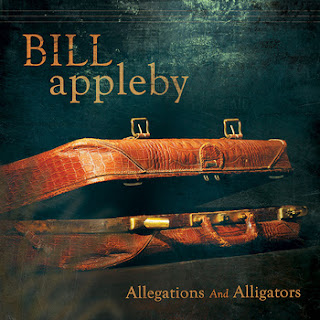 Continuing on with the finds from my recent fact-finding mission to Halifax, we have this gem from Cape Breton songwriter Appleby. Okay, I say fact-finding, but what that actually means is I hang around in bars for a few days and watch bands. That's a fact, at least.


Appleby is one of the mainstays of music events in the region, involved in the production side of music weeks, awards shows, festivals, etc. I always see him at everything, and the past few times, I'd ask him, "How's that album coming, Bill." This time though, he replied, "Oh, I got one for ya." "And it's good!," chimed the guy throwing darts just past my head.


The dart-thrower was right. Appleby's an old-school writer, happy in roots styles, and not stuck in any of them. Opening cut Steps swings along with banjo, clarinet, Dixie horns and a sizable number of singers. But he turns that on its head right away, with cut two, (Hurricane) Gabrielle a slice of outlaw country. And so it goes throughout, cuts like Red Neon the kind of honky-tonk swing Ian & Sylvia used to do with The Great Speckled Bird. So it's a mixed bag in that good way, lots in the assorted box of chocolates, even some hefty rockers. John Prine does that, Kristofferson as well.


Veteran producer Hayward Parrott has brought in lots of the best East Coast talent for this one, lots of singers and horns, and a crack core band featuring Blake Manning on drums, Stuart Cameron on guitar, Peter Fusco on bass and keyboard king Kim Dunn. Damhnait Doyle is used to great effect on Wild Wind, a sweet foil to Appleby's rough-edged voice, Haggard even (as in Merle).


It's a big production, and fitting, as Appleby's words deserve it. He's a story-teller, with lots of life's mistakes to pass on, but few regrets, and a few pearls of wisdom too. There's a light-hearted wit too: "There's been allegations made, and I know who the alligators are."


Good one Bill, see you next time.
Posted by Bob Mersereau at 10:23 PM