MUSIC REVIEW OF THE DAY: JOHN MAYALL - FIND A WAY TO CARE 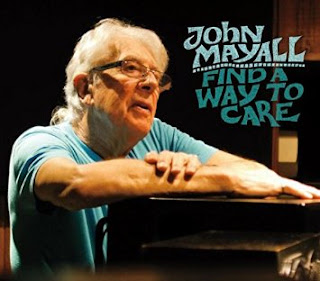 The ageless Mayall (okay, it's 81) continues to impress, and make some of the best music of his career as well.  Coming off last year's very strong A Special Life, he switches things up a bit here, with a set that puts the spotlight on his keyboard playing.  Whether its up-front organ playing on faster numbers, or strong piano-led slow tunes such as Drifting Blues, Mayall is in firm command of the proceedings from behind the 88's.

There's also a horn section added to several cuts, which helps set this album far apart from the normal blues fare, dominated by so many guitar bands.  Mayall's keyboard dominance on the cuts is wall-to-wall refreshing as he moves through several styles, from the solo stride of his own Crazy Lady to the classic 12-bar of Don Robey's Mother In Law Blues.  Mayall penned five of the 12 songs here, and his choice of covers is impeccable.  He steers clear of the usual suspects, and prides himself in finding more obscure works from Percy Mayfield, Lightnin' Hopkins and Lee Baker.  Even his voice is holding up pretty well.  Eric who?  Fleetwood what?
Posted by Bob Mersereau at 10:21 AM