MUSIC REVIEW OF THE DAY: ROXY AND THE UNDERGROUND SOUL SOUND - DON'T YOU KNOW? 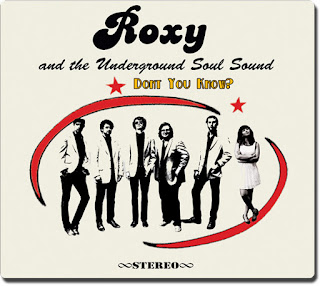 I don't get away enough. I really should travel more, if only to find out about different scenes in other cities. At least I get to Halifax every few months, and inevitably I find out about more music I haven't heard yet. Usually it's at a show, hanging out with music people, meeting someone new, who then gives me their latest. "Oh, you're that guy." Yup, that's me.


My last trip to Nova Scotia yielding three such meetings in one night, so I'll devote the next three columns to that. These are particularly new releases, just new to me, but certainly worthy of sharing, better late than never.


Roxy and the Underground Soul Sound are an r'n'b/funk/soul group fronted by dynamite lead singer Roxy Mercier. Heavy on the horns, the seven-piece put up a smooth sound on their debut, Don't You Know? That came about when they won the Galaxie Rising Star Award at the Halifax Jazz Festival in 2014, and used the prize money to get into the studio.


Smartly, they brought along Erin Costelo, who knows her way around a good soul song. She helped arrange the eight band originals with lots of classic moments: funky keyboards, big Aretha backing vocals, wah-wah pedal guitar solos, and those horns.


Yes, there are similarities to the Daptone Records sound (which is a very good thing of course), but I wouldn't compare Mercier to Sharon Jones, she's her own singular talent, and I can't rightly think of any similar voice. She has a lot of punch, and always seems to be singing with strength, even in the quietest moments.


Yes, the album has been out for a bit, but it turns out my mention is a timely one: Roxy and the Underground Soul Sound will be at Plan B in Moncton on Friday, Oct. 9, and then on Oct. 30, they are playing at home, at Halifax club The Carleton.
Posted by Bob Mersereau at 1:47 PM