MUSIC REVIEW OF THE DAY: SQUEEZE - CRADLE TO THE GRAVE 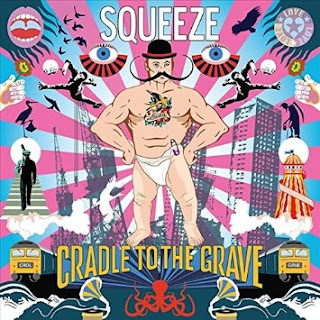 Squeeze has kept the flame going when needed over the past few years, touring for the fans (and the pounds), financing the solo careers of leaders Difford and Tilbrook. There have been a few albums too, although no completely new material since 1998's Domino. So this is a pretty big deal for band and followers.


The band is still a vehicle for Difford and Tilbrook, along with a trio of recent additions, although John Bentley, from the hit days of the '80's, played bass on some tracks. The real magic of the band is always the pairing of D&T's songwriting, and after listening to most of their solo albums, it does seem they need each other to hit those highs.


And oh what heights they hit. If you're a lover of the old days, Pulling Mussels and all that, you'll find plenty of moments to cheer. The title track is both catchy and punchy, with all the word play. Big group harmonies pile up on the tracks, and as in the old days, Tilbrook's voice shines, a high-pitched happy sound, with just that right touch of Jack the Lad.


In the early days of the group, they sang a lot about working class young folk in England, but as they've aged, that's been replaced by a lot of songs featuring nostalgia for those days. Some of those songs can come across as rote, with Sunny and Only 15 joining the pile of memories. But as the rest of the numbers show, there's lots of life left in the band to look forward to. On with the show, this is it!
Posted by Bob Mersereau at 4:26 PM