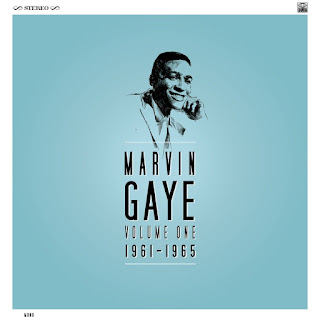 While Marvin Gaye is known for making one of the great albums of all time, 1971's What's Going On, until that time, he was known mainly as a singles artist. All the Motown artists had been; Berry Gordy had focused on the 45 as his money-maker, and it really took Marvin and Stevie Wonder to show him there was bigger money to be made in the long-player by the time the '70's arrived. So most of us Motown fans have greatest hits records or label compilations rather than the albums the '60's stars released. Here, the first seven Gaye studio albums are collected in one box, most of them unknown and unheard even to big fans (like me).


Marvin Gaye actually started out as an album artist, making "serious" music rather than pop hits for kids. One of the earliest Motown signings, his first record saw him trying to carve out a niche as a smooth jazz crooner, in the Nat King Cole style. His album, The Soulful Moods Of Marvin Gaye was only the second Motown LP, released in 1961. A small combo joined the singer, who also contributed drums and piano on this set of mostly standards such as Witchcraft and My Funny Valentine. Berry Gordy produced the album, but didn't really want his new star doing this star. The deal was that Marvin could make his album, but also had to record some r'n'b for the kids. Guess what sold?


With Gaye now a force on the pop scene, his next one featured his current hit singles, Hitch Hike, Pride and Joy and Stubborn Kind Of Fellow. This is a particularly strong early Motown release, with all original tracks and no covers, songs written by Gaye and producers Gordy, Clarence Paul and Mickey Stevenson. So strong was the set that one of the album cuts, Wherever I Lay My Hat, didn't even rate a 45, finally becoming a huge European hit for Paul Young 20 years later in 1983.


Marvin hadn't given up on the adult music though. His third album, When I'm Alone I Cry from 1964 returned to the jazz field. This time he tried for a dark mood, with Billie Holiday's You've Changed, and other songs on the theme of lost love and growing apart. It wasn't bouncy and fun like Can I Get A Witness, and once again, both kids and adults paid little attention.


So it was back to the pop charts for album five, this time a disc celebrating his new partnership. In an effort to boost his career, Gaye was teamed up with Motown's current female star, Mary Wells, who had just hit the big time with My Guy. The Together album was a modest success, with two minor hits (Once Upon A Time and What's The Matter With You Baby), and even decent album sales, easily Gaye's best showing on larger platters to that point.


A mere seven months later Gaye released Hello Broadway, changing tactics once more. This saw him trying out show tunes, everything from My Kind Of Town to Hello Dolly. His version of People was a showstopper, but there was little else to excite, and once again, it failed to sell. So 1965 saw him back with more pop hits. How Sweet It Is To Be Loved By You celebrated his most recent hit single, plus several others from the months before that hadn't been collected on album as yet. Gaye had recently begun working with Holland-Dozier-Holland, and they had brought him the excellent, smart You're A Wonderful One, and the lively Baby Don't You Do It, which showed what could happen when Marvin got moving. Despite his natural inclinations, he was always better when he got off the stool and danced instead of sitting on it and crooning.

He would give the sophisticated style one more shot with album seven. A Tribute To The Great Nat King Cole came out a few months after Cole died in 1965, and showed everything the type of artist Gaye wished he could be. Unfortunately, it also showed why he couldn't match up. Gaye needed passion in his performance to sound great (think I Heard It Through The Grapevine) rather than cool sophistication. Nature Boy, Ramblin' Rose, Mona Lisa, Unforgettable, they all fall flat with Marvin unable to put a spark in his performance.


Gaye was famous for being at odds with Motown and Gordy over the direction of his career. It's interesting that at various times one or the other was right. Marvin's version of Grapevine sat unissued for over a year before finally becoming one of the biggest pop hits of all time. Gordy was adamant that What's Going On shouldn't come out, but he was proven wrong immediately upon release. Yet Gaye was completely out of touch with goal to follow Cole and Ray Charles into jazz and supper clubs.


It all makes for an interesting, varied package here, never a poor listen but certainly uneven. It's quite grand to have these under one, cheaper roof. But certainly for a great star, they should have included a booklet with even the basic information, such as songwriters on some of the albums. I do like that $35 price tag for the CD's though. Not so much the $187 for vinyl.
Posted by Bob Mersereau at 7:22 PM