MUSIC REVIEW OF THE DAY: SMALL FACES - THE DECCA YEARS 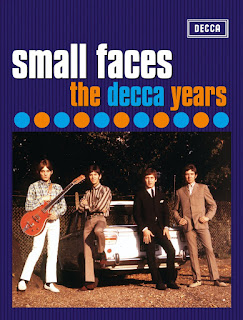 Let's narrow this down. This box set features only the Small Faces, not the Faces, the band they became when Ron Wood and Rod Stewart joined. Now let's narrow it even further. This doesn't look at the group's entire career, but rather just their first two years, while they were with Decca Records. So, five CD's, ya that's pretty much a comprehensive package.


It's also a time when the group was breaking out in the U.K., but unknown in North America, before Itchycoo Park introduced them here. So while this set is packed with hit music, it will be discovery time for most of us. Here's why that's a good plan. This is one rockin' beat band.


The Small Faces were a band pulled in several different directions, some of them of their own interest, others forced on them by management. With Steve Marriott on guitar and lead vocals, Ronnie Lane on bass, Ian McLagan on keys (replacing Jimmy Winstone) and Kenney Jones drumming, they were a powerful engine, capable of raw blues and pounding mod hits, all at a terrific volume. But since it was a singles game, they also had to manoeuvre around the pop hits they were handed, or came up with on their own.


What's fabulous about these songs is hearing numbers that would normally be light and breezy fare if handled by Herman's Hermits or even The Hollies turned into much more heavy fare. Big British hit Sha La La La Lee is a bubblegum as they come, but somehow it works, even with the dumb lyrics. What'cha Gonna Do About It is a better-written effort, but again the band raises it to an exciting level.


You can hear the group trying to decide what kind of group they should be. There are certainly moments when they rival The Who, and it's no wonder Jones was asked to take over Keith Moon's stool when the latter died. Jones was more controlled but had equal strength. The covers give another indication; Marvin Gaye's Baby Don't You Do It and Sam Cooke's Shake were intense takes on the originals. Then there's the controversial You Need Loving, which is credited to Marriott and Lane but is really just a rewrite of Willie Dixon's You Need Love. That's normal enough, but then Led Zeppelin took most of it and made Whole Lotta Love, without crediting either. Anyway, Small Faces had enough punch to be Zeppelin, if they'd chosen to go that way.


There's a whole great biography about dealing with notorious manager Don Arden, getting all hippy on Ogden's Nut Gone Flake, Marriott quitting to form Humble Pie with Peter Frampton, and Ron and Rod showing up to save the day. This is the British Invasion band that we missed.