MUSIC REVIEW OF THE DAY: CHRIS COLEPAUGH and the COSMIC CREW - RnR 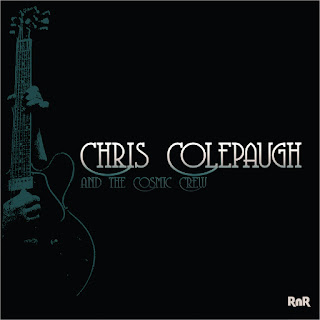 It's been six years since the Crew last released an album, not coincidentally the same amount of time since leader Colepaugh took over lead guitar duties with fellow NB'er Roch Voisine, joining the Acadian star on his international tours. While he has less time to devote to his own activities, that's led Colepaugh to take his time, working while he can on recording. It gave him some room for reflection perhaps, and the big move here is deciding how much he wanted to rock.


This is CCCC in its purest form, a riff-happy set of loud rock songs, classic guitar-bass-drums solidly locked into the '70's. Even the bluesiest, slowest number here, Thinkin' About You, is wall-to-wall layered guitar, sweet tones and crunching chords. With a bedrock bottom end, the rest of the album is Colepaugh providing monster lines, showing both his lead skills and his ability to coax all sorts of cool tones out of his gear.


Colepaugh is also singing great on this one, a little more oomph to go along with the power. And, the material is still highly-tuneful, with lots of strong melody lines and plenty of added hooks to sweeten the deal. The album closes with a lone cover, the Big Star power-pop classic When My Baby's Beside Me, where Colepaugh adds his own arrangement of a middle break which fits in perfectly. The guy's totally connecting with his guitar these days, and it's the band's best start-to-finish effort in a 20-plus year career.
Posted by Bob Mersereau at 11:01 PM