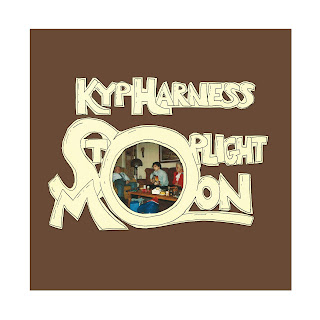 After the all-out assault of 2014's Armageddon Blues, where Harness unleashed a surprising torrent of political numbers, taking aim at the Tories, corporations, the greedy and powerful, this album sees him return to his more usual fare. Perhaps he's feeling the sunny ways, or at least a bit of a relief. So back to matters of the heart, tongue-in-cheek jibes, and some heart-felt, purely positive thoughts.


Our title cut is a fine image, a stoplight moon being that brief, impactful moment in the city, when you catch a glimpse of nature stuck among the nighttime buildings. Where The Spirit Resides is a celebration of the best of people: "It's in the one who asks forgiveness, and the one who offers it." Still Learning is a gentle, touching look at parenthood by someone not quite at ease with the situation, but happy to be there.


It's not all so positive; Old Hippie is a pretty hilarious shot at a stereotypical 60-something, who might have gone to Woodstock, and still thinks he's that same guy, but doesn't know he capitulated sometime in the '70's. "You still believe in peace, but only as an abstract concept/meanwhile you have some property you want to lease." And there's a hurtin' country song, called, umm, I Hurt.


So, easier fare, until you dig into the lyrics and discover the depth of Harness's observances, and understand of what makes us tick. Some writers can put a whole world in one song.
Posted by Bob Mersereau at 10:16 PM