MUSIC REVIEW OF THE DAY: JEFF HEALEY - HEAL MY SOUL 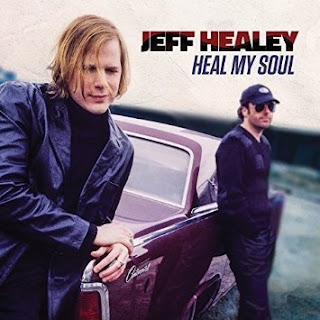 Not many major league artists leave behind entire albums' worth of unreleased studio material, at least the good stuff. But the late Healey had a treasure chest full that he never got around to dealing with in his short lifetime. These are tracks recorded for his final rock-blues album with the Jeff Healey Band, 2000's Get Me Some. He had recorded lots of tracks that didn't make that album, some he really liked a lot, but never found a way to put them out. That's largely because it was right at the last gasp of the original band, as Healey got fed up with the whole business side, and chucked it all for his main love, traditional jazz.


Now the family trust has put together this set, with some of the colleagues and friends from that time, trusted to make choices Healey would approve. This is a surprisingly hard-rocking set, especially his guitar playing. It features some of his most incendiary solos, and in many cases, start-to-finish loud, unrestrained riffing. The cut Please is one of those, the soloing almost constant. Moodswing is another raver, unlike anything he'd done before. Fans of Healey's guitar work will find a whole new side to his playing here, and will wonder what might have happened had he continued down this road.


Wisely, the folks involved left the tracks alone, choosing to go with bare-bones performances of the trio rather than adding even discrete embellishment. There are some mix issues, some guitar work that might have been replaced or sweetened, but it's always better to hear where the artist was going, rather than hear somebody's guesswork. There are a couple of calmer tracks, including All The Saints, which only had his acoustic guitar and voice, but it's much more effective and beautiful this way, especially contrasted with all the electric guitar blitz. The only disappointment is a cover of Richard Thompson's I Misunderstood, where Healey misses the subtlety and ache of the original. But the 11 other cuts could easily have made one his albums, and that's pretty rare indeed for a posthumous collection.
Posted by Bob Mersereau at 9:08 PM