MUSIC REVIEW OF THE DAY: THE JAMES HUNTER SIX - HOLD ON! 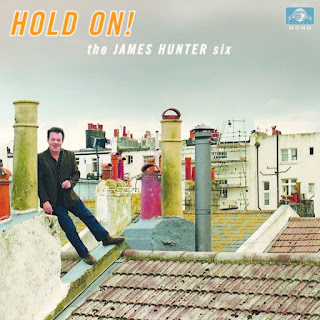 British R'n'B singer Hunter has been around since the 80's, but first became known as a protege of Van Morrison, who spotted him in London clubs. Then he had a breakthrough album a decade ago with his first album in these parts, People Gonna Talk, a vocal gem. Somehow the promise of that didn't come through, so in a very smart move, he's found a natural home with the soul powerhouse Daptone Records.


Daptone fans certainly know the horn-driven, retro-influenced sound of label stars Sharon Jones and Charles Bradley, but Hunter offers a somewhat different style, just as piping, but a little earlier on the soul scale. The small, tight horn punches are still there, but it's more sophisticated, less Stax-raw. This is late '50's-influenced, more jazzy at times, people such as Ray Charles, Bobby Bland, even a little Jackie Wilson. You can hear what Morrison liked about him, the similar loves.


There's also more room in Hunter's tunes to mix up the sounds. Satchel Foot, an instrumental where the Six get to show off, has twangy surf guitar and chugging sax on top of organ, a nod back to the sounds of Georgie Fame holding court in the early '60's London clubs. But what will bring you back time and again is Hunter's grand voice, a remarkable blend of smooth and gruff, able to bend into the blue notes with deep emotion and a ton of groove.
Posted by Bob Mersereau at 9:12 PM