MUSIC REVIEW OF THE DAY: DANNY MARKS - CITIES IN BLUE 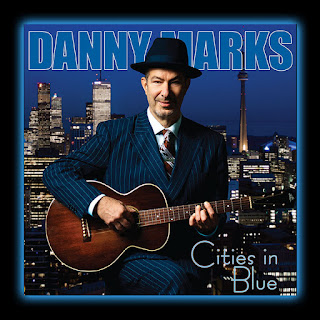 Here's the collection blues fans who watched the Marks-hosted HIFI TV series Cities In Blue have been calling for since it started airing in 2014. A strong concept about the bedrock cities of the blues, eight in all (Chicago, Memphis, etc.), Marks was not only the perfect guy to lead the journey, he was also the heart of the program, contributing his own new music for each destination. You have to have knowledge, interest and sweeping ability to move from style to style, and create new music that compliments the sacred sounds of each blues home.


Marks also put together an A-list of Toronto players, also able to do anything from electric Chicago to classic Piedmont. The brothers Whiteley are here, producer Alec Fraser on bass, drummers Bucky Berger and Al Cross, David Rotundo on harp, Julian Fauth on keys, and several more. But key to it all is Marks, both vocally and on guitar, digging out just the right instrument for each selection, and selecting the right players.


If you're not completely familiar with each city's classic style, Marks gives you the goods in a tune that could have come from one of the local masters. Kansas City Shout swings along with lines about 12th Street and Vine, a jazzy piano from Fauth, and references to Big Joe Turner. Memphis Got Soul has horn nods to Stax, guitar for B.B., and shout-outs to Sun Records, the whole stew down there. Heading Down to New Orleans has an easy stroll, and in it you can hear the common root of jazz and blues and whatever else gets thrown in. Hey, New York Town! is sophisticated and modern, with a hint of danger and nightlife in there.


Best of all, the songs are fresh and fun, as current as they are in classic styles. In lesser hands, these stylistic tributes could have come out as cliched facsimiles, but Marks has written, and the band has played, strong new cuts that would work well on their own, even if we weren't happily joining him on the travelogue.
Posted by Bob Mersereau at 10:10 PM