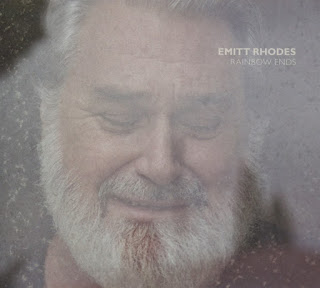 One of the most unlikely comebacks in pop music history sees this brand-new collection from cult figure Rhodes. A one-time 70's chart hopeful, he had precisely one entry to his name, 1971's Fresh As A Daisy, which stalled at #54. At least his '60's band, The Merry-Go-Round, had done slightly better, with two singles breaking the Top 100 in 1967. He was better known for his three albums early on in the '70's, which he wrote, recorded and produced himself, highly-regarded but time-consuming to create. Under a ridiculous contract to deliver an album every six months, Rhodes saw his career wrecked, unable to get out of the contract or get any royalties, so eventually he just gave up, and moved into work as an engineer and producer.


There was always a small following, and slowly but surely others picked up on him. The 2000's started with an old song featured on The Royal Tenenbaums soundtrack, then came tentative steps back in the game; a cut here and there for various small projects, a Record Store Day single, and then some folks familiar with his work started helping him out in the L.A. area, such as Richard Thompson and a couple of Bangles.


Still shy of the recording industry, finally young fan/producer Chris Price convinced him back for this full album, with the help of a Pledge Music campaign. Price rounded up more of his friends, and turned them on Rhodes, including Aimee Mann, Jellyfish members Roger Manning and Jason Falkner, members of Brian Wilson's band, Susanna Hoffs, and Wilco's Nels Cline.


So, that's the whole back story you need to know, and the good news is that the comeback has indeed been successful. Rhodes is a strong pop artist, with a compelling, warm voice, and some fine, emotional songs. Instead of making the stars shine here, Price puts them all in anonymous support roles, the focus staying firmly on Rhodes' voice and words. There's a melancholy through it all, no doubt the result of some troubles over his 66 years, but you're not left searching for damage or music business shell-shock. Indeed, the strength of his voice is remarkable, and the quality of the songs consistently strong.


It does have a shiny '70's vibe to it, and the radio in my head has these numbers playing on a summer's eve in the calm hours when the program director won't allow screechy electric guitar solos. And there are a couple that get a little too mellow, a little too close to an England Dan and John Ford Coley sound. But on everything else, this is a darn fine pop album, '70's touches but for those fans who have grown along with times.
Posted by Bob Mersereau at 2:26 PM