MUSIC REVIEW OF THE DAY: RONOK SARKAR - WAITING FOR ALICE 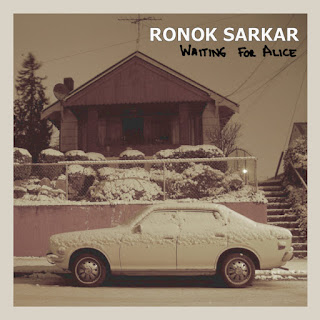 Stepping away from his larger, cinematic-roots orchestra Bend The River, Halifax's Sarkar strips things down for his second solo outing. He starts and ends things on this eight cut album with a couple of aching piano ballads, weary and just creaky enough for the front parlour: "Oh between your heart and mine, there's no longer anything," he sings on This Fight.


For the most part the songs feature just Sarkar on guitar or piano, along with Adam Fine's upright bass, an intimate and warm production. There's the occasional embellishment, a helpful banjo, dobro, violin or mandolin, but mostly you sink back with Sarkar's easy, mellow voice. Philip is a lyrical departure, a violent death in vivid detail, once again showing Sarkar's visual songwriting abilities. The Open Way has the easy-going swagger of Gram Parsons' solo works, Andrew Sneddon's dobro and Rebecca Zolkower's harmonies sweet accompaniment.


Then there's the tribute to Halifax songwriter and poet Tanya Davis, an inspired bit of writing that matches her impact: "You don't know what she's feeling or what she will say, but you know that the next drink will taste different." As much as I like the grandness of Bend The River's 2014 album So Long Joan Fontaine, Sarkar does small just as potently.
Posted by Bob Mersereau at 10:15 PM