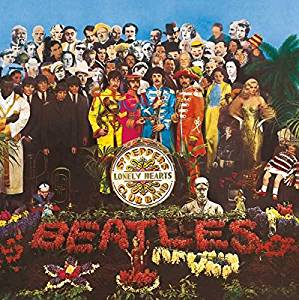 If you're one of these people who hum and haw about how foolish these reissues are, filled with early takes and slightly different mixes, just do me a favour and listen to the tracking session for She's Leaving Home here. No Beatles, no vocals, just the string section playing their part. It's beautiful, incredible really. Or listen to the first Pepper-era work, the single Strawberry Fields Forever, and hear how this relatively simple song became complex over the course of a weekend, Lennon lowering the key, starting with the chorus instead of the verse, and added the famous mellotron opening. It was, in the words of George Martin, the birth of the psychedelic music era.


Yes, we've celebrated this album a million times. I'm old enough to remember both its release, and the first big anniversary in '87, when everybody was pointing out "It was 20 years ago today." Bits and pieces of session material has come out, but this is the real windfall, with Apple finally cluing into the fact that we want to hear these archaeological takes. Frigs sake folks, it's probably the most popular album of all time, we know every sound inside and out, so its a blast hearing the variations and how the band and Martin did their magic, one brilliant idea at a time.


Here are your options. There's a two-disc set at 28 bucks that gives you the main album with the brand-new Giles Martin remix on one, and the entire album plus the Strawberry Fields Forever/Penny Lane single in different takes on disc two. You can do that on double vinyl for forty bucks, minus the Strawberry/Penny cuts. You can get a single disc with just the new mix, that's $21 right now. Or, you can shell out about $200 (tax in) to get four CD's, a blu-ray and a DVD, and hear things like Paul, John and George trying to work out harmonies and handclaps in the studio to Penny Lane. It's actually pretty riveting, if you like The Beatles.


There's a lot more in the Super Deluxe box. In addition to the two CDs of alternate material, the fourth disc is the fan-favourite original mono mix of the album, arguably the version you need the most, as that's where the most time was spent in the first place, as stereo still hadn't made it to most teenager's bedrooms. The blu-ray/DVD (they have the same content) includes a very good TV documentary done on the album on its 25th anniversary, featuring McCartney, Starr and Harrison, plus George Martin in the studio with the original tapes, doing that great thing where they pull down some of the tracks to reveal single parts you may not have noticed before. It's Ringo on maracas! You also get some promo videos (nothing new) and the brand-new Giles Martin mix for 5.1 and hi-res stereo.


All these different mixes will have you spinning, but the younger Martin has done a great job of highlighting some moments that offer a slightly different experience. It's not necessarily better, but it is a bit clearer I'd say, and its fun to hear Ringo's drums boom out of the speakers now on With A Little Help From My Friends, or hear Lennon's somewhat basic guitar as part of the magic final mix of Strawberry Fields Forever. Oh, and you know the end of Good Morning, Good Morning, with all those crazy animal noises? Well when the cat shrieked, my beloved companion Mr. Peaches snapped out of his respite here on the couch beside me, startling us both.


Then there's this crazy big, hard-cover 144-page beast of a book that I tried reading in bed the other night, and which smacked me hard on the nose when I drifted off. It hurt. It's that big. I can't tell you if these are going to come down in price or not over the next few months, maybe at Christmas I suppose, but look, they really have done it up right, and I think you'd have to be a curmudgeon to complain too much, there's a ton of new stuff here, and it's Sgt. Bleeding Pepper, it's amazing there's anything new. And I am a notorious curmudgeon, just ask Mr. Peaches. But I truly think the box is worth your $200 if you can swing it. Perhaps sell your own, inferior pet, suggests Mr. Peaches.
Posted by Bob Mersereau at 11:23 PM