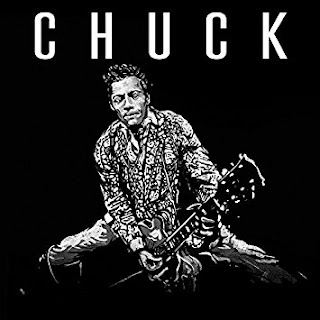 I suppose it's fitting the notorious Berry didn't live to see his victory lap, dying weeks before this album was issued, his first of new material in over three decades. While he no doubt felt he deserved the praise, he wasn't one to accept it graciously. And we are talking about the only person who ever unnerved Keith Richards.


It's been interesting to watch the subdued reaction to his death, surely not celebrated nearly as much as other trailblazers, even though he is more influential than perhaps anyone else. He was rock and roll's first poet, and the inventor of half the guitar licks and tricks still being used today. But he was also a creep and a criminal, his treatment of women particularly awful. However, that and worse has been forgiven or hushed up by a long list of white artists with deep pockets, who have been allowed to pass away with their accolades intact. I'll watch closely when Jagger and Richards leave this mortal coil, and see if they get treated with the "boys will be boys" lines.


As for this last album, this took around a decade to make, but so much the better for it. Berry came up with several original songs that didn't just capture the spirit of his famous '50's and '60's hits, they actually stand up with them. The cut Big Boys features all the hallmarks of a Berry classic. There's a well-relayed story about a kid who wants to hang around with the big kids, join the party, and of course at the end we realize he's talking about joining a rock 'n' roll band. It starts off with one of his classic riffs, and keeps the guitar up all the way. Wonderful Woman is in the same vein as Little Queenie, with those extended lines that always end up in a great rhyme: "You was rocking me baby with your rhythm in the second row/Just thinking about it breaks my heart I had to let you go."


On the surface, it might seem like a bad idea to update Johnny B. Goode, but surprisingly Lady B. Goode works out okay. They story is fine, about the woman our hero left behind when he went off to find fame, but he doesn't quite live up to his obligations once he finds out there's a Johnny Jr. At least he put her in the movie about his life. Less successful is the remake of the old Havana Moon cut from the '50's, now Jamaica Moon, with a painful patois. What was okay back in the day can be cringe-worthy now.


Another big accomplishment here is the sound of the album. Berry is listed as producer, and I'm sure the engineers helped lots, and what they came up with was a mix of the old-style, guitar-and-vocals up front sound of old, but a much cleaner version of all those old Chess sides. It's like 60 years passed, and nothing changed except the technology. Aside from a couple of awkward moments, this is quite a triumph.
Posted by Bob Mersereau at 4:58 PM