MUSIC REVIEW OF THE DAY: STEVE EARLE & THE DUKES - SO YOU WANNABE AN OUTLAW 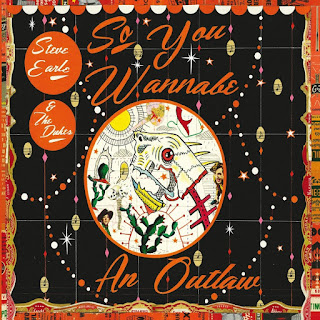 Earle's walked a lot of paths over his four-decade career, even adding some N.Y.C. street beats a few albums ago, but he's always been an outlaw too. This set sees him focused back in that direction, with the album dedicated to Waylon Jennings and several of the cuts in direct homage. That means his hard-working, longstanding touring group The Dukes was just perfect for the studio work this time, ready with fiddle, pedal steel, mandolin and lots of down and dirty guitar. Earle himself even sounds gruffer than usual, ear-pleasing vocals definitely not the priority here.


Willie's on hand for the title cut, to add his blessing to the proceedings, and he's sounding pretty growly too, advising all the wannabes that would like to emulate him that you "can't trust anybody not a lover or a friend/Your mama maybe, then, you never know." As he explains in the liner notes, part of the reason for the album is because of all the funerals he's been going to of late, peers and heroes from his salad days starting out in Nashville, in a late-night songwriter scene where Waylon was king. But as always, Earle doesn't sit long in sentiment, and offers up some hard truths, cautionary tales, touching ballads and even a number (Fixin' To Die) that's hard-core outlaw bordering on, well, hard core. But his heart is still on display too, with the finale Goodbye Michelangelo his tribute to his own late guru, Guy Clark. Oh, if you can't tell by now, fans of early Earle (Copperhead Road, etc.) will find this fits in well.
Posted by Bob Mersereau at 10:03 PM