MUSIC REVIEW OF THE DAY: CHEAP TRICK - WE'RE ALL ALRIGHT! 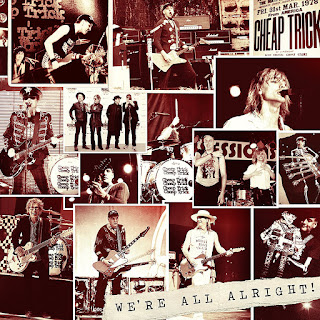 I'm still bugged at the way Cheap Trick treated drummer Bun E. Carlos, refusing to let him record or tour (although he maintains 25 per cent interest in the band business, where the real money is). What set the band apart were the unique personalities of Carlos and guitarist Rick Nielsen, and it doesn't feel right without him. We're talking about a band that's had to travel on its image for much of its career, with a relative few classic songs and great albums to show for four decades, so willfully dumping the cool-looking drummer lessons my interest for sure. Really, we watch this band for fun, mostly.


They can at times come through with some decent songs, and this is one of their better sets, certainly a few cuts above last year's Bang, Zoom, Crazy...Hello, which was rushed out to capitalize on their Rock and Roll Hall of Fame induction and tour. It was filled with inane, high school band lyrics, and seemed to be purposely dumbed down, like they were trying to appeal to high school kids again. Please take no offence high school kids, I'm generalizing to make a point. This time though, some of the old humourous spark is back, with titles including Brand New Name On An Old Tattoo, and while they won't trouble the legacy of Leonard Cohen, at least it's not all mindless.


The music side seems sharper as well, with some Stooges-like raw power to some of the American glam they pioneered back in the day. Not quite enough on the pop side of things though, the band seems to want to veer towards metal or Kiss more than the catchy material, and I think they do themselves a disservice. See for instance the deluxe version of the album, which adds three cuts, all in that power pop vein, including an ace cover of The Move's Blackberry Way. Cheap Trick is a band that a lot of people pull for, but they seem to be their own worst enemy.
Posted by Bob Mersereau at 10:45 PM