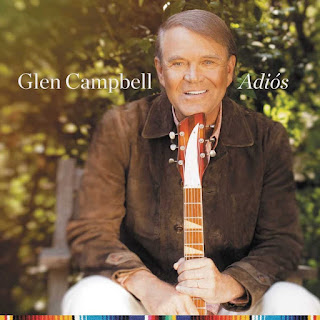 This is billed as the final album by Campbell, pieced together from a batch of final sessions for which he mustered the strength about five years back, before his dementia took over. From the liner notes, we find that each vocal was hard work for the singer, but that he did want to be in the studio. The sessions were run by his longtime friend and former banjo player, Carl Jackson, who had to do the lion's work of putting together the bits and pieces, but obviously with affection and a desire to make it a strong collection, songs that he knew Campbell loved.


Although guitar playing was past his powers by this point, Campbell sings as great as ever, which alone makes this a worthwhile effort. At its heart are four songs by long-time collaborator Jimmy Webb, each one sounding as if it was written to be sung by Campbell. Truly, it was always, and remains a thing of magic, pairing his voice when Webb's great ballads of male romantic pain. Each of the four here deserves to be heard alongside the earlier hits, with the same touches of sadness as By The Time I Get To Phoenix and Galveston.


There are several other good choices, taken from songs Campbell often performed live, including the old Nillson hit Everybody's Talkin', which always sounded like a Glen song anyway. Dylan's Don't Think Twice, It's Alright was a parlour trick Campbell would do on guitar, and while Jackson had to handle those licks for this, the singer still sounds like he's having fun making Bob country. There are some that don't quite click, including Funny How Time Slips Away, writer and guest Willie Nelson sounding tacked on (as he was), and She Thinks I Still Care is serviceable, but it's still George Jones' song. But there's nothing maudlin, and the Webb cuts make this a valuable collection. For added enticement, there's a second disc of Campbell's greatest, in case you don't have Wichita Lineman nearby.
Posted by Bob Mersereau at 7:19 PM