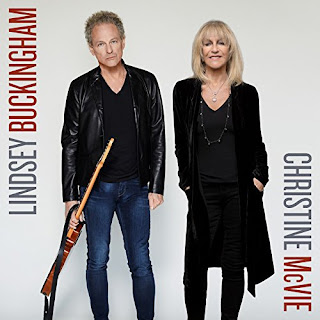 How delightful is this? Of all things, a relaxed, happy, almost-Fleetwood Mac album in the vein of Tango In The Night. It's filled with bright, bouncy tracks, first a Lindsey one, then a Christine. That classic rhythm section of John McVie and Mick Fleetwood provides their tight, soft backing as well. All that's missing is, well you know who.


That's the real story here of course, as this was supposed to be the big comeback album for the group, after Christine McVie rejoined for the 2014 On With The Show tour. Heck, that's even one of the tracks here. But while everybody else started working on the album, Stevie Nicks backed out, focusing on her own career as well. So once again, the world's most dysfunctional band proves they still can't really get along, despite their best efforts.


It was eventually decided to get on with it, but instead of calling it a Mac album and having to explain why no Stevie (oddly, she continues to tour with them), they took this different route to highlight the songwriting and singing efforts of Buckingham//McVie. This time, there's none of Buckingham's studio shenanigans, as he tempers the wacky and provides tight, glossy and gorgeous pop numbers such as Love Is Here To Stay. It's a hypnotic thing floating along on a cushion of lovely voices from the two of them, and his jangly acoustic guitar. He can do this stuff in his sleep, but so what, it's great music-making, and I'm always glad when he doesn't sabotage his pop with sharp left turns.


The big news though is the return of Christine McVie to songwriting after her long hiatus. She sounds great, like she hasn't missed a beat, and first single Feel About You is a welcome return to those classic numbers that radiate with warmth. The first few songs (side one for your vinylists) are the best, and her Too Far Gone sounds like some generic 70's number, but as always, Buckingham makes every number sound great at least. They'll probably lose out on about two million copies in sales by not calling it Fleetwood Mac, but it was probably worth it instead of going through the soap opera and added Nicks to the mix.
Posted by Bob Mersereau at 10:33 PM