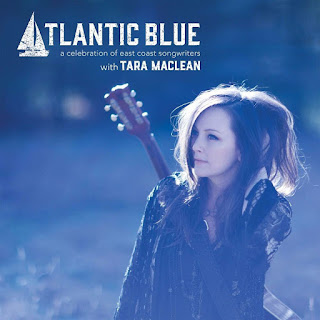 MacLean left music work for a full nine years to raise her three kids on Salt Spring Island in B.C. But when her grandmother back in P.E.I. became ill two years ago, she started missing the Island, and music too. So she came up with a plan to get herself back in, and back home. This album is a companion piece to a show she has developed, playing all summer in Charlottetown. It features the work of several of MacLean's favourite East Coast songwriters, a celebration of their talents, and an introduction for some of her fans who might not be familiar with the depth of talent in the region.


The show will feature MacLean and her band singing these numbers, plus telling the stories of the creators, with spoken word and film elements. Local fans are going to know many of the songs of course; there's Gene MacLellan's Snowbird, Rita MacNeil's Flying On Your Own and Ron Hynes gets two cuts, the title one and Sonny's Dream. Others are less familiar, including Stompin' Tom's Coal Boat Song, Stan Rogers' Turnaround, and Fear by Sarah McLachlan. The album is aimed a little more at the many tourists who flock to the Island, plus those who can't, introducing them to these top tunesmiths. Plus, there is a big wide audience of basic East Coast fans who will enjoy MacLean's interpretations, particularly her always warm voice.


For those who have heard most of these songs more than a few times, there's new life in all of them. Snowbird features a duet with fellow Islander Lennie Gallant (also featured here with the songs La Tempête), a more mellow version than Anne Murray's chipper hit. Coal Boat Song now sounds like a Little Feat number, and Flying On Your Own has beautiful fiddle parts from Richard Wood, and harmonies from MacLean's lifelong friend Catherine MacLellan. Produced on the Island by Chris Gauthier, the album has the sound and authenticity of Atlantic roots music all the way through.
Posted by Bob Mersereau at 5:02 PM